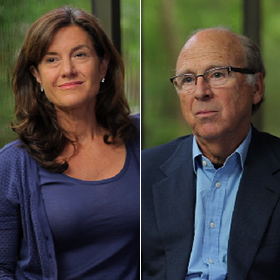 Barbara and J.R. "Pitt" Hyde know a thing or two about sweat equity. "We all jump in there, and it’s really whatever it takes to get the job done," says Pitt, founder of AutoZone Inc. and the J.R. Hyde III Family Foundation. That hard work and perseverance has been crucial to the Hydes' mission to revitalize Memphis, especially in the field of education reform.

At the forefront of education reform

Indeed, today the city of Memphis—in part due to the Hydes’ work and owing to wins such as grants from the Gates Foundation and Race to the Top among other factors—is a hotbed of exciting education initiatives. And it's one that many are calling an “overnight success,” says Barbara. Yet, it's important to note that this “overnight success” was 20 years in the making. Pitt points out that the first breakthrough was getting charter school legislation approved. Memphis has now had charter schools for 10 years, he says, but it took five years to make that progress. "We went up there personally and knocked on every door in the legislature," he says. Barbara notes that building the charter schools into high performers and bringing some national partners to the city—such as Teach for America, KIPP, and New Leaders for Schools—also required hard work and a long-term commitment. "We spent years putting the building blocks in place that I think positioned Memphis and Tennessee to be one of the first Race to the Top states and have this big opportunity we have now," she says.

See a complete archive of Barbara and Pitt Hydes’ videos.
More From the Blog

As part of their work in education reform, the Hydes have found that striving to influence public policy is a must. In 2006, Barbara told Philanthropy Roundtable, "If you care about changing school districts and affecting schools...you also have to be willing to...use your money both in appropriate philanthropic ways to support advocacy efforts directed at public policy and also to use your personal dollars to help recruit and support candidates." That stance is true for the Hydes today. Barbara points out that philanthropists are in a unique position to help overcome the divisiveness that plagues causes like public education reform. Yet, even so, philanthropists must brace themselves for the tough road that lies ahead.

Especially for philanthropists coming to education reform from the business sector, where change can happen quickly, the public sector can seem like a whole new world. "The biggest shock that we all go through—and it’s a learning curve—is how most of the problems are, from a business point of view, very solvable," says Pitt. "But it’s the politics and the entrenched interest that make it so difficult to bring about change." To work towards that change he says that you’ve got to sustain your effort over a long period of time.

Although influencing public policy takes much "personal time, energy, and effort over a sustained period of time," says Pitt, the Hydes are devoted to education as a pathway to societal reform. "The value that really underpins what we do in our philanthropy is about a great belief in the capacity of the individual to rise above their circumstances," he says. "So much of what we try to do is to empower the individual and, of course, that’s why education is one of the big things." Barbara adds that another value that undergirds the Hydes’ philanthropy is a deep belief in the words, “To whom much is given, much is expected.” Plus, she says, "It's just fun."