What they are doing:

Since January 2011, the Austin Independent School District (Austin ISD), which has 85,000 students and 129 schools, has been planning and leading systemic social and emotional learning (SEL) implementation as one of the Collaborative for Academic, Social, and Emotional Learning's (CASEL) eight collaborating districts (See sidebar for more information on this initiative). During an initial planning year, Austin created an SEL design team of district administrators to conduct a districtwide needs assessment. It also created an SEL advisory team comprised of teachers, principals, representatives from community organizations doing child and youth development work, and other community stakeholders. As part of the design phase, the district created an SEL department to lead the work. The team decided to use the existing vertical teams based on school feeder patterns to manage the SEL rollout, starting with two such teams comprised of 27 schools. Today, nine teams are involved, representing 101 of the district's 128 schools. Each school has a point person (often the counselor) who plays a key role in implementation and serves as a liaison with district's SEL department.

Austin has a three-pronged SEL model: explicit, evidence-based instruction; embedding SEL into classroom climate, culture, and curriculum; and integration across the school day. SEL looks different across grade levels. In high schools, explicit instruction can take the form of an advisory meeting—a regular meeting of a small group of students with a teacher over the course of the year—focused on different SEL behaviors and attitudes, or a semester-long course focused on SEL as well as study skills. And in elementary schools, Second Step provides an evidence-based resource for classroom instruction. 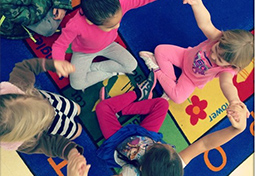 Students in Austin ISD participate in a greeting circle as part of SEL activities.

Moreover, certain elements, like the use of "peace areas" have become routine for Students in Austin ISD participate in a greeting circle as part of SEL activities. 2 handling conflict resolution and are part of a common language used by all school staff, inside and outside the classroom. Dedicated SEL coaches (typically former classroom teachers known for their exceptional classroom cultures) observe classroom lessons and provide feedback to teachers on how they are integrating activities or practices that support social and emotional development, such as supporting small group collaboration and decision making. Coaches spend time at each school monthly, which keeps SEL front and center for principals and teachers. The coaches also assist in-school vertical teams to build administrators' and teachers' capacity to sustain SEL implementation efforts over time. This approach is distinct from that of other districts in CASEL's Collaborating Districts Initiative, which have leveraged existing coaches.

CASEL and the Collaborating Districts Initiative

The Collaborative for Academic and Social Emotional Learning (CASEL) has long focused on the quality of school-based social and emotional learning programs, and over the past 20 years many high quality programs have been developed and put in place at the school level. Seeking to move from individual school to districtwide scale, CASEL launched the Collaborating Districts Initiative (CDI) in 2011. It recognizes that positive student outcomes depend on improving classrooms and schools, which in turn depends on improving districtwide capacities and conditions. Austin Independent School District and Metro Nashville Public Schools are two of the large districts participating in this initiative. For more details on what it means to participate in the CDI, including the supports districts receive and the commitments they make, see CASEL's website.

The SEL coaches also have been part of important behind-the-scenes work to integrate SEL instruction into teachers' curricular tools and ongoing professional development. Over the summer, teacher representatives from each department had a special training session on how to become advocates for the integration not only of SEL but also physical education and fine arts. These teachers then worked in their departmental teams, assisted by the SEL coaches, to write curricula and lessons plans. These teacher advocates are in a position to encourage their colleagues to integrate more SEL, physical education, and fine arts into the school day. SEL coaches also support districtwide professional development planning teams, looking for opportunities to integrate learning opportunities related to SEL, physical exercise, and fine arts into the district's professional development efforts.

In Austin's case, initial funding for SEL work came through a grant from CASEL and the NoVo Foundation. In addition, the district has received some helpful community support—a $1 million matching grant from a set of donors early on, and another $1.5 million from additional community donors. Some of the coaches are paid from federal Title 2 professional development funds. Over time, Austin hopes that as teachers and administrators build their skill at this work, fewer coaches will be required to sustain high-quality SEL instruction across the district. Responding to requests from principals, the district has put stronger focus on making them leaders of culture and climate in their buildings. SEL Director Sherrie Raven and her team are working to develop an SEL professional learning community for principals, and they are working with assistant superintendents on how to integrate SEL into their conversations with principals. In addition, the district is working with the University of Texas College of Education to develop SEL instruction for teachers in training. Professors are examining their courses to better align them with the school district's SEL standards.

What they are learning:

Although still in the early stages of rollout, the SEL department already has identified several lessons:

This profile is one of a series of profiles on organizations focused on developing effective learners.