Metro Nashville Public Schools Superintendent Jesse Register made social and emotional learning a priority in the his school district, making it an integral part of the education experience for students, teachers, and families.

What they are doing:

Metro Nashville Public Schools Superintendent Jesse Register is such a champion of social and emotional learning (SEL) that he made it a priority in the district's 2013–2018 strategic plan. But even before that plan went into effect, he began taking steps to make SEL an expected, integral part of the education experience for students, teachers, and families.

For example, Register set up the district's first SEL department in 2011. Charged with facilitating the social and emotional well-being of Metro Nashville's 83,000 students across 154 schools, the department developed a plan to broaden the definition of success for Metro Nashville students to include social and emotional well-being, to develop a common language for SEL across the district, to engage all students in rigorous SEL instruction, and to embed a focus on SEL into all other district initiatives. Its goal is to help teachers integrate SEL into their daily practice, not to teach it as a separate subject. One important development toward this goal was creation of the district's framework for student goals, which integrates academic, behavior, and social and emotional goals into one place. 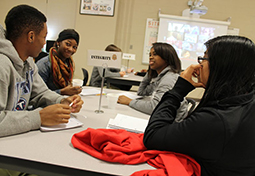 Since joining the initiative, the district has been integrating various professional development programs into the SEL department, a move that underscores the importance of SEL in student achievement. Linking academic and noncognitive professional development creates a seamless approach to improving teaching practice. One such approach is the Classroom Organization and Management Program (COMP), designed to help educators create positive classroom environments that support academic success. Kyla Krengel, the director of the SEL department, noted that "COMP supports teachers in organizing the classroom and proactively teaching the prosocial skills and behaviors that students need to be successful." Kelli Flower, a first grade teacher, agreed. "I enjoy embedding SEL strategies into my teaching and appreciate how COMP is folded into the overall SEL plan in the district," she said. Metro Nashville also is helping instructional coaches and specialists become fluent in SEL concepts and activities rather than create a new set of instructional coach positions dedicated to SEL. By doing so, Metro Nashville hopes to ensure that SEL will become part of the fabric of professional development.

CASEL and the Collaborating Districts Initiative

The Collaborative for Academic and Social Emotional Learning (CASEL) has long focused on the quality of school-based social and emotional learning programs, and over the past 20 years many high quality programs have been developed and put in place at the school level. Seeking to move from individual school to districtwide scale, CASEL launched the Collaborating Districts Initiative (CDI) in 2011. It recognizes that positive student outcomes depend on improving classrooms and schools, which in turn depends on improving districtwide capacities and conditions. Austin Independent School District and Metro Nashville Public Schools are two of the large districts participating in this initiative. For more details on what it means to participate in the CDI, including the supports districts receive and the commitments they make, see CASEL's website.

District staff members have also analyzed the new Common Core State Standards to understand how they call for students to develop social and emotional proficiency alongside academic content. And they have made it clear to teachers where the standards include a focus on SEL. Doing so makes it easier for instructional coaches to blend SEL into Common Core-focused training efforts. Leah Dalrymple, a literacy coach at J.E. Moss Elementary School observed that "the language of the Common Core provides teachers with flexibility to incorporate the social and emotional learning competencies within daily instructional tasks. We finally have the chance to integrate content with real-world life skills."

Metro Nashville's elementary school students are participating in Responsive Classroom, an evidence-based SEL program that will soon be tested at two middle schools. In the district's high schools, students are experiencing SEL as they participate in project-based learning—exploring real-world problems and challenges, and engaging in individual research and group discussions. The Buck Institute, a nonprofit focused on project-based learning, is providing expertise and technical assistance to support those efforts, and it will also offer support when the district formally brings project-based learning to its elementary and middle schools as well.

Middle and high school students are also participating in a new advisory system launched for the 2014–15 school year as part of the district's SEL efforts. Under this system, groups of students will meet regularly with a single teacher over the course of their middle- or high-school experience. This teacher, their advisor, will strive to be a resource for the students, not only for academic support and encouragement, but also for social and personal development. Teachers and schools have been given a great deal of flexibility to tailor their approaches to the advisory system, but they have received a suggested curriculum from the SEL department to guide their efforts.

One frontier for Metro Nashville will be revising its teacher evaluation framework to include SEL competencies. In 2014, Krengel began working with assistant principals, other administrators, and teachers to identify points of intersection between SEL and other indicators of teacher effectiveness.

Krengel and her team are also creating a course—SEL Foundations—to help administrators, teachers, athletic coaches, and other school and district staff members learn about SEL and evaluate and improve their own SEL competencies on a broad scale. As Krengel put it, "Adults need to be able to model good behaviors and get along so that the kids can see how to do it."

What they are learning:

This profile is one of a series of profiles on organizations focused on developing effective learners.