Download the Full Report
For the most part, funders prefer to write checks for program support and show little interest in fully funding critical nonprogram-related expenses. Those include indirect costs associated with shared administrative or support functions, capacity building expenses associated with organizational growth, and reserves needed to sustain the organization in times of revenue shortfall or unforeseen shocks. Several stakeholders described the typical funder mindset as anything that goes outside of program costs does not contribute to impact.

Advocates for change have been hindered by what one Indian funder called "a serious shortage of evidence." To address this shortage, Bridgespan conducted a survey of 388 NGOs representative of the sector, and a financial analysis of 40 leading and relatively well-funded NGOs. Our research revealed a clear pattern of chronic underfunding leading to severe financial stress. 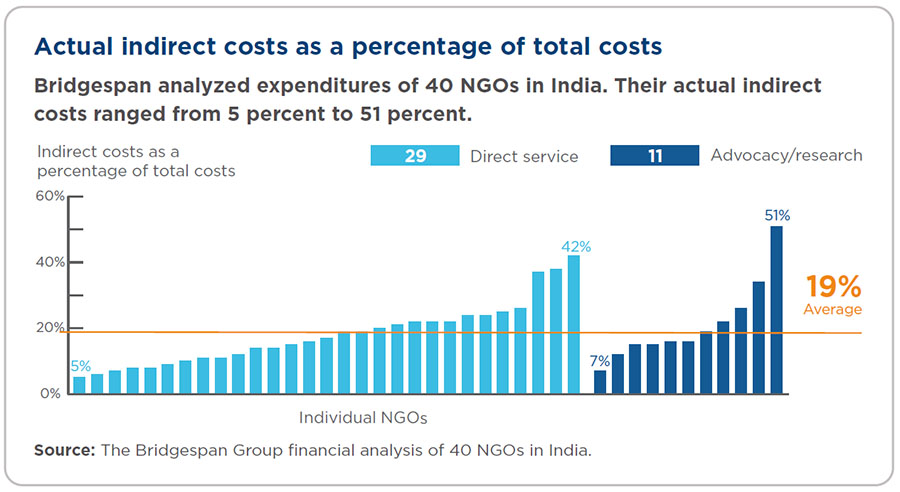 Changing the practices that lead to these results requires a different approach to grantmaking. In search of a solution that supports both strong programs and strong organizations, Bridgespan developed with the Ford Foundationa simple Grantmaking Pyramid that reframes how funders and their grantees can think about building successful, resilient organizations.

Like the pyramids of old, ours rests on a sturdy foundation that builds upward toward an impact goal. First, NGOs need to build strong foundational capabilities, such as strategic planning and leadership development. Second, NGOs need financial resilience that comes from accumulating unrestricted reserves. Third, NGOs need to scale the reach, effectiveness, and impact of their programs.

The Grantmaking Pyramid has the potential to broaden conversations between funders and NGOs about true  costs and adequate funding. Based on our India and global experiences, and drawing on our interviews with sector leaders, we have distilled four recommendations that draw on the Grantmaking Pyramid and hold promise to set funders and NGOs on a new path. With so much to do, and so much at stake, it is understandable for a funder to feel overwhelmed and uncertain about where to start. We suggest three immediate actions. Right away, reach out to grantees and understand their true funding needs. Simultaneously, reflect on your own policies and how they contribute to chronic underfunding. And resolve to refine those policies as needed to advance change, drawing on the experience of peers that have already committed to investments in nonprogram costs and organizational development of NGOs.

Chronic underfunding undermines the very impact funders and NGOs strive for. This is a complex, systemic issue, and all stakeholders need to work together to solve it. The evidence in hand argues that it is time for funders to act—to partner with NGOs and provide them the resources they need to build the organizational strength and financial resilience to help solve some of society’s most pressing problems. The status quo serves no one well.

1. KPMG in India provided support for this analysis for the limited purpose of assisting The Bridgespan Group in analyzing data provided by the 40 NGOs to derive insights pertaining to their funding. The analysis should not be construed as an audit or validation of cost structures of any of the NGOs covered in this project.