Appendices to the white paper, "Growth of Youth-Serving Organizations," commissioned by the Edna McConnell Foundation.

In addition to studying 20 youth-serving organizations in depth, we also looked at the youth-service domain from a macro-economic perspective. Doing so allowed us both to size the growth challenge as well as to set the parameters for choosing organizations to explore in greater depth. We analyzed a dataset provided to us by the National Center for Charitable Statistics (NCCS). This dataset contained information from IRS Form 990 documents, for the years 1996 through 2002, and allowed us to track total annual revenue by size of organization, sub-domain, organizational structure (affiliated vs. stand-alone), geography, and age of organization. Among the findings:

In conclusion, while a strong, steady growth rate is rare, it is not an unattainable goal for organizations and their funders.

Once we identified the NTEE codes, we purchased a database from NCCS that contained data for all U.S.-based organizations under those codes. We obtained data for the years 1996 to 2002. If an organization did not file a Form 990 in a given year, then the organization was not in our database for that year. As well, we should note that only those organizations with annual gross revenue of $25,000 or greater must by law file Forms 990. Therefore, our dataset (and subsequent analysis) excluded numerous small organizations. 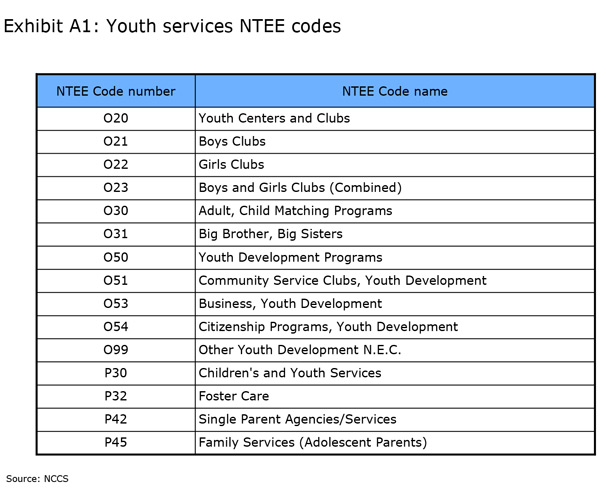 As a result of this selection process, we created a database for the year 2002 comprised of 7,164 organizations. These organizations had revenue that totaled $8.0 billion for that year. In 1997 (the earliest complete year of data we could obtain), the database contained 5,079 organizations, with revenue totaling $4.7 billion. Between the years 1997 and 2002, many organizations dropped out of the database because they did not file Forms 990. Likewise, many new organizations were added to the database. We will discuss this phenomenon in the “A Growing Domain” section that follows.

Growth in the youth-service domain was strong over the period 1997 to 2002, in terms of both number of organizations in the domain and the revenue of those organizations. We compared this growth to growth rates in the private sector, in the macro-economy, and in other nonprofit domains.

The number of organizations in the domain grew 41 percent over the six years, from 5,079 to 7,164. In particular, 914 organizations dropped out of the database, while 2,999 were added into the database, resulting in a net addition of 2,085 organizations. This translates into a 7 percent compounded annual growth rate. (See Exhibit A2.) Over the same period of time, the number of U.S. firms registered with the U.S. Census bureau grew by a total of only 3 percent.

To compare growth of the youth-service domain with growth of other nonprofit domains, we looked at the growth rates of nine other domains, including: Education; Environmental Quality, Protection and Beautification; Arts, Culture and Humanities; and Employment, Job Related. We obtained this data from the NCCS website, using gross receipts as a proxy for revenue due to data availability. Revenue growth in the youth-service domain outpaced the gross receipts growth in eight of the nine domains. (See Exhibit A4). 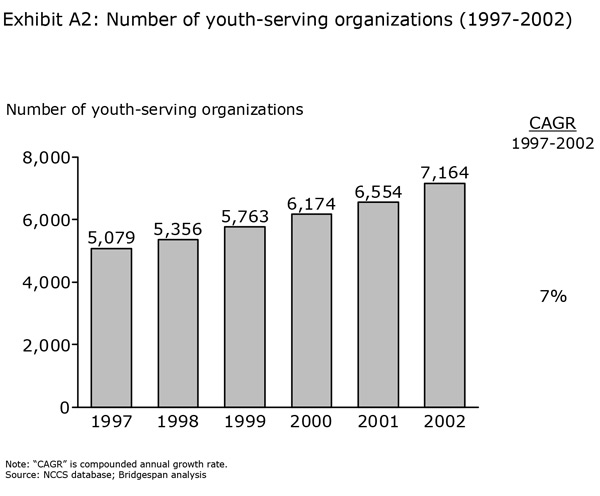 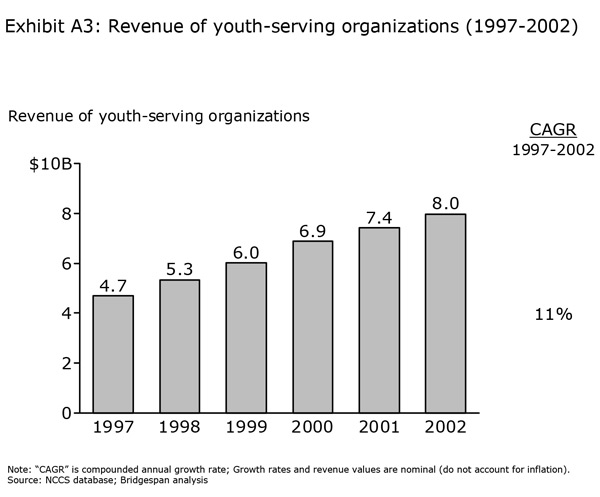 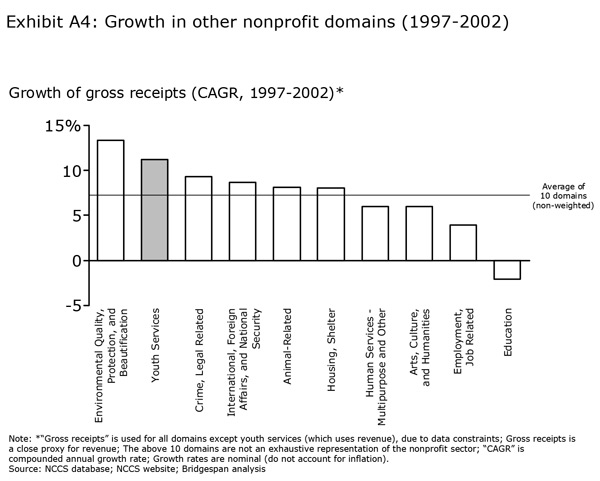 Where the funds flowed

We have already established that the youth-service domain grew quickly over the time period, increasingly by $3.3 billion. But where did those funds flow?

Funds did not flow uniformly across the sector. That is, the $3.3 billion in total domain revenue growth was not distributed evenly by size of organization, sub-domain, organizational structure (affiliated vs. stand-alone), geography and age of organization:

The paths of growth (and decline)

The vast majority of youth-serving organizations in our sample experienced an increase in overall revenue over the time frame, but the rate of growth and the stability of growth varied dramatically. 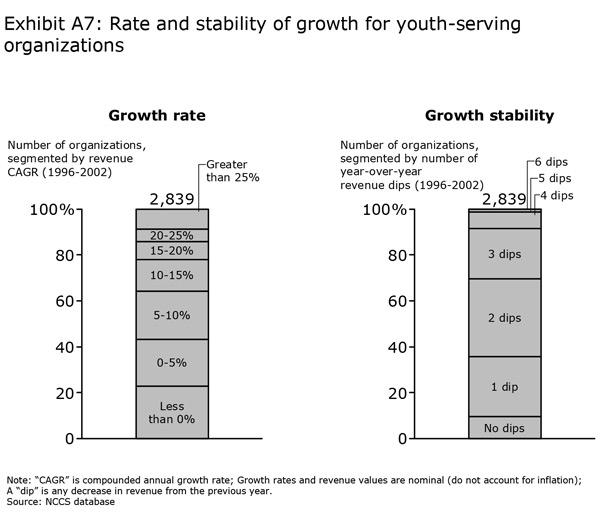 Did growth paths vary for different types of organizations? Once again, we analyzed the data by looking at size of organization, sub-domain, organizational structure (affiliated vs. stand-alone), geography and age of organization. We performed two-sample T-tests to check for statistically significant differences in average growth rates and number of year-over-year revenue dips for organizations in different categories.

Stand-out observations are below:

As a result of this analysis, we grouped organizations into six major funding paths, taking into account both the amount of revenue growth and the stability of that growth. (See Exhibit 8.) While 23 percent of all organizations were in the top right quadrant, experiencing the “high growth, stable path,” 38 percent were in the bottom lower quadrant, experiencing the “low growth, unstable path.” Therefore, while a strong, steady growth rate is rare, it is an attainable goal for organizations and their funders.

Appendix B: Methodology for the Study

There are many possible avenues for trying to learn more about the question of growth. For instance, one could study the organizations directly serving youth, or compare the efforts of those that are trying to support growth. Within those categories, a study could range from a broad review of many organizations to an in-depth analysis of one or a few, and it could consider the experiences of those that have succeeded or failed in their efforts (or a sampling of both). After much discussion, we decided that a potentially powerful line of inquiry would be to look at a set of 20 youth-serving organizations that had all experienced significant growth in the past five to seven years.

Several assumptions are embedded in this approach. First, we believe that much can be learned about how to support growth by looking at the organizations providing services themselves rather than undertaking a comparative study of foundations or other supporting organizations. The latter may also prove valuable, but we believe that examining the organizations on the front lines can offer a useful vantage point for understanding growth. We expected that this study would identify trends that could then be explored by a more in-depth look at supporting organizations if such an effort was deemed worthwhile.

Second, we decided to take a relatively intensive look at 20 organizations rather than a narrow view of a much larger sample set or a comprehensive study of a few organizations. The latter approach has been quite common through case studies or articles that look at the experiences of several organizations. Looking at a significant number of organizations allows for a consideration of trends as well as varying approaches to a relatively common set of challenges. Clearly it does not allow for statistically significant findings; but it has the advantage of producing far greater depth than a similar investment in a much broader study.

Third, we looked at examples of successful growth rather than those organizations that failed in their pursuit of expansion. The primary reason for doing so was that one of the chief topics of interest was the effect of growth on an organization, which cannot be addressed by looking at those unable to succeed. Two cautions are warranted on this point.

We defined success in terms of the organization’s ability to increase significantly the reach of its services (as measured by growth in the number of youth served and in the organization’s revenues) and not in terms of the quality and effectiveness of those services (as measured by good youth-service programming and by positive effects on the participants). To assess the latter, we would have had to evaluate each program and compare the results of growth to other options (such as program improvements) that the organization itself could have taken or that its funders could have chosen—both of which were beyond the scope of this study.

The relationship between growth and quality, in the nonprofit sector generally and the youth-service domain specifically, is a critically important issue, and deserves to be studied in its own right; but it was not the focus of this project. Inclusion in this paper reflects neither positively nor negatively on the quality of the programs the participating organizations provide, therefore, but only on the fact that they were able to expand significantly the delivery of those programs.

Also, while we do believe that it is possible to draw implications from the experiences of these organizations, the fact that we have not considered examples of organizations where the same factors were present but growth failed to occur warrants caution in taking these insights too far. Even though some of the findings appear to be quite robust, they should nonetheless be taken with the warning that the sample is skewed.

With these basic ideas in mind, we selected a group of 20 organizations. The initial list of potential participants was generated through several sources: Clark grantees, Bridgespan clients, sector experts, and a database from the National Center for Charitable Statistics (NCCS). Within this set, we looked for organizations that:

We used revenue as a proxy for growth, because it indicates that the organization was facing the type of challenges (such as increasing fundraising capacity or adding to its infrastructure) that we wanted to study. We also wanted to consider organizations that have grown, at least in part, by adding new participants, as it creates a different set of issues than those that are only adding new services for existing participants. (That said, we did not find any organizations in the latter category that met our size criteria.)

All of the organizations that were invited agreed to participate. They can be categorized into three basic types. First, there are organizations such as Jumpstart and Public Allies that have attempted to expand nationally, at least to some extent. These fit the classic conception of replication.

Third, we included local affiliates of some of the more established national networks like Boys and Girls Club and Girls, Inc. These organizations have played a critical part in the growth of the domain. For example, Big Brothers, Big Sisters accounted for about 90 percent of the over $200 million spent on adult/child matching programs in 2002, while Boys and Girls Clubs received almost three out of every four of the nearly one billion dollars invested in youth centers and clubs in the same year.[1] Given the enormous presence of affiliate networks in this domain, it would be a gross oversight to undertake a study of growth among youth-serving organizations while excluding them. However, the nationals are much too large to provide an accurate comparison point to the other organizations. They also face very different issues, whereas their affiliates face similar challenges to stand-alone organizations, because they operate with a significant level of autonomy, even though they are members of national networks.

Sources Used for This Article