From a small start in Atlanta in 1971, Communities in Schools (CIS) has grown to become the largest dropout prevention program in the country. By bringing caring adults into schools to address children’s unmet needs, CIS frees up teachers to teach and helps students focus on learning. While the charisma of CIS founder Bill Milliken drove early connections to large donors, in time, the organization began to rely heavily on federal funding, which has created some ups and downs. In the 1980s, CIS transitioned to a national network structure—a move that spurred growth by allowing state offices to seek their own funding.

The 60’s saw a lot of great movements that died. They were led by great frontier people who couldn’t relate to the settlers. They wanted new ideas but didn’t build organizations. Passion and professionalism keep it in balance.

Communities In Schools began in Atlanta in 1971 as EXODUS, a program which helped young people finish high school. In 1973, that effort became the dropout prevention model that was studied, refined, and replicated across the country under the name Cities in Schools, now known as Communities In Schools.

From its beginnings in Atlanta, CIS has grown to become the largest dropout prevention program in the country, reaching nearly 2 million children and families in 28 states. The organization works to insure that every child receives the “five basics”: a personal relationship with a caring adult; a safe place; a healthy start; a marketable skill; and a chance to give back. It has championed the connection of needed community resources with schools. By bringing caring adults into the schools to address children’s unmet needs, CIS provides the link between educators and the community. The result: teachers are free to teach, and students—many in jeopardy of dropping out—have the opportunity to focus on learning.

CIS is now a national network of state offices and local programs. Its network structure allows state offices to seek their own funding, while the national office derives its funding from large donations from individuals and foundations as well as from a federal earmark. Cross-sector boards with business, nonprofit, and school leaders are also critical to CIS. 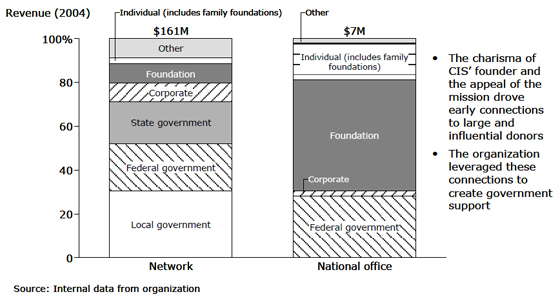 Revenue growth: The success of the network model and the development of a central office in the early 1990s fueled CIS’ growth. 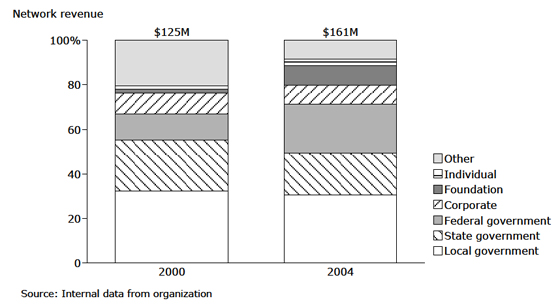