Since 1987 Conservation International (CI) has built a compelling scientific case that protecting specific biodiversity hotspots will preserve a significant percentage of the Earth’s variety of life. Conservation International combines scientific inquiry and large-scale conservation—a mix that has appealed to foundations, which have responded enthusiastically to CI’s brand of “charismatic scientists” and have driven much of CI’s growth. “Three factors have led to our success,” said COO Niels Crone. “We are focused on donors who care about and agree with our mission. We have compelling data that tells our story. And we are absolutely accountable for our results.”

Three factors have led to our success. We are focused on donors who care about and agree with our mission. We have compelling data that tells our story. And we are absolutely accountable for our results.

Conservation International’s mission is to conserve the Earth’s living heritage—our global biodiversity—and to demonstrate that human societies are able to live harmoniously with nature. With headquarters in Washington, D.C., CI works in more than 40 countries on four continents. CI’s conservation success relies in equal measure on sound science, diverse partnerships, and a commitment to the welfare of people everywhere. The organization emphasizes scientific information to target the world’s most threatened places; reaches out to hundreds of partner organizations, both large and small; and works closely with local people.

CI has built a compelling scientific case that protecting specific areas of high biodiversity will preserve a significant percentage of the Earth’s variety of life. Biodiversity hotspots hold especially high numbers of endemic species, yet their combined area of remaining habitat covers only 2.3% of the Earth's land surface. Each of the 34 hotspots faces extreme threats and has already lost at least 70% of its original natural vegetation. Half of the world’s vascular plant species and 42% of all terrestrial vertebrate species are endemic to the 34 biodiversity hotspots. CI also focuses on high biodiversity wilderness areas—five regions of low human population densities that have more than 70 percent of original vegetation and are among the last places where indigenous peoples can maintain traditional lifestyles—and key marine regions containing crucial biodiversity that remains mostly unstudied.

CI’s combination of scientific inquiry and large-scale conservation supports the organization’s appeal to governments, foundations, and wealthy individual donors. CI seeks to maintain operational autonomy by appealing to funders who agree with the fundamentals of its mission. CI also has leveraged its financial stability to expand into market-based approaches to conservation and form partnerships with governments, multinational organizations, private corporations, and other stakeholders. The organization’s partners include the governments of Japan, France, Madagascar, and other nations; the World Bank; corporations such as McDonald’s and Starbucks; various international, national, and local non-government organizations around the world; and local and indigenous communities.

Beneficiaries: Diverse and at-risk ecological areas, residents of these areas, and human society at large

Revenue growth: Foundations have been a key driver of much of CI's growth. A grant from the Gordon and Betty Moore Foundation produced CI's biggest revenue spike. 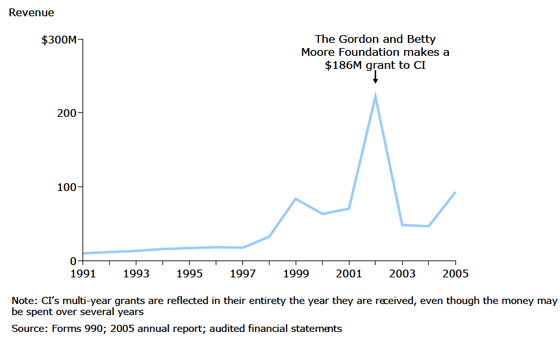 Funding mix: Despite its large size, CI continues to receive a large percentage of its funds from foundations. 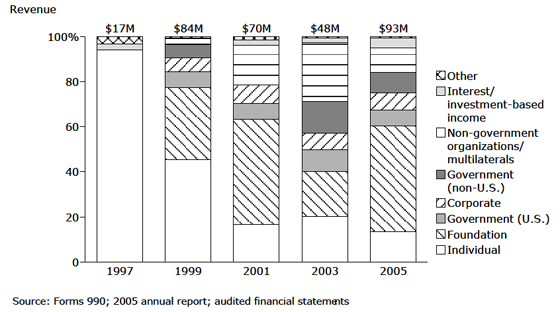 Sources Used for This Article

2. An additional $75 million was part of the grant, conditional on CI identifying matching funds.