Since 1976 Habitat for Humanity has been using donated building materials, professional services, and volunteer labor to help low-income families become homeowners. This Christian ministry is largely funded by small individual donors. A key asset is Habitat’s strong brand. As the organization has grown, its network model has enabled it to continue to engage communities on a grassroots level—essential to successful mass fundraising.

A strong brand is at the center of our fundraising from so many small donors. But the tremendous value of Habitat's brand name has grown slowly and depended on the organization's stability.

Habitat for Humanity builds and rehabilitates houses in partnership with volunteers and families in need. Since 1976, Habitat has been using donated building materials, professional services, and the labor of countless volunteers to help more than 200,000 low-income families realize the dream of home ownership.

The organization is now a global network of more than 2,300 local affiliates, each responsible for operations and fundraising in its service area. Habitat for Humanity International (HFHI) is the central service organization that coordinates national and international fundraising efforts and grants, as well as provides training, information, and management services to its affiliates. Families are selected by local affiliates based on need and are required to participate in the construction process. Habitat sells the houses to the families at cost, with no-profit mortgages. Mortgage payments go into a recycling fund that helps to build even more Habitat homes in the local community.

Habitat is a Christian ministry that welcomes to its work all people dedicated to the cause of eliminating substandard housing. The organization relies on its brand, its network of volunteers, its connections to communities of faith, and corporations to meet its fundraising goals. It receives the vast majority of its donations from small individual donations (i.e., less than $100) and markets heavily to corporations for funding as well as in-kind support of labor and materials. The organization traditionally has accepted government funding for land and infrastructure, and its affiliates can accept limited government funding for house construction. Habitat also receives government funding for AmeriCorps staff stipends and activities such as capacity-building projects.

This profile depicts funding information for HFHI. While HFHI does not publish audited financial statements for its entire network, it estimated affiliate revenues to be $840 million in 2005. The average Habitat for Humanity affiliate relies even more heavily on individual donations than does HFHI. Affiliates also derive significant funding from the sale of houses, accounting collectively for just over a third of their total revenue.

Beneficiaries: Low-income families in the United States and abroad

Revenue growth: Habitat’s revenue has increased steadily over the past several years, save a slowing in 2001 when 9/11 relief diverted some individual donations. 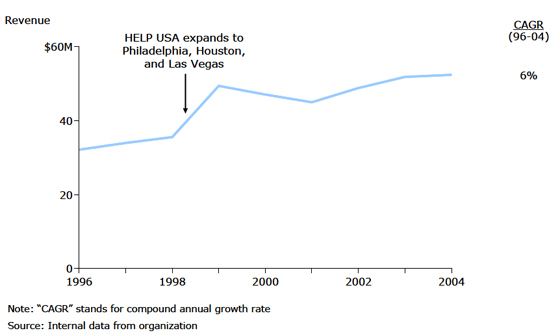 Funding mix: individuals providing the organization with the bulk of its revenue.