HELP USA builds transitional shelters, provides support services, and moves homeless families to stable housing faster than welfare hotels. Over the years, the organization has branched out geographically and has expanded its programming. While it is somewhat limited to those services the government will reimburse, its growth has come, in part, through its ability to demonstrate better outcomes at a reduced cost, manage complex finances, and maintain an engaged board.

It’s not enough to be ‘right,’ and be on the side of ‘justice,’ because there are lots of those organizations. You also have to run it well.

The organization has expanded its programming to include permanent housing options as well as welfare-to-work, one-on-one child mentoring, and domestic violence programs. It also has grown geographically, branching out from its New York origins to operate sites in Philadelphia, Las Vegas, and Houston. Now one of the nation’s largest provider of supportive housing, the organization serves more than 5,400 homeless and low-income individuals each day. HELP USA wants to increase its investment in permanent housing going forward.

HELP USA uses low-income housing tax credits to develop its facilities. It relies on government contracts to fund many of its support services as well as its programs that help prevent homelessness. For services that are considered core to its model but not reimbursed by government funding streams (e.g., on-site day care, social services, and security guards), it seeks unrestricted funds from rental income, contributions, and tax credits.

Funding mix: HELP USA is working to increase its rental income and private contributions to access greater unrestricted funds. From 2002 to 2004, the organization did not tap into low-income housing tax credits, but it does intend to do so going forward. 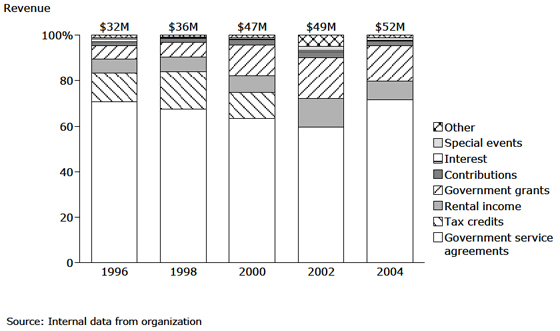