Founded by the International Churches of Christ in 1991, HOPE worldwide delivers community-based services to poor people. The nonprofit operates in more than 70 countries and assists more than one million people each year. Focusing on education for children and medical services for the elderly, HOPE worldwide relies on volunteers to build strong ties with the communities it serves. Despite challenges in funding organizational capacity, the nonprofit has been able to support its ever-expanding services by reaching beyond its base of small individual church donors and tapping government and corporate grants. In-kind donations from corporations and hospitals also have been instrumental in its growth.

We trained our donors to expect that a dollar invested led to a dollar spent on the ground. But as we have grown, dollars from restricted donations have had to bear their share of overhead.

Founded in 1991 by the International Churches of Christ, HOPE worldwide works to change lives by harnessing the compassion and commitment of dedicated staff and volunteers to deliver sustainable, high-impact, community-based services to the poor and needy. Its services center on helping children and seniors by providing long-term basic health care and educational services. Guiding principles include building strong ties to the communities the organization serves and relying on volunteers.

HOPE worldwide operates in more than 70 countries including the U.S. and assists more than 1 million individuals a year. Its strong ties with the International Churches of Christ facilitate fundraising efforts and provide the organization with volunteers. Supporting growth has required HOPE worldwide to reach beyond its base of small individual donors from church communities. It now taps into government and corporate grants and also relies heavily on in-kind donations to operate its hospitals and medical clinics.

HOPE worldwide’s central office coordinates the collection and allocation of funds, in-kind donations, and volunteers. It gives its affiliates significant autonomy in their daily operations.

Beneficiaries: Disadvantaged children and the elderly in developing communities 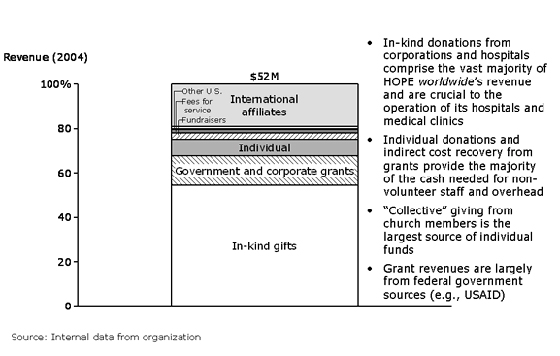 Revenue growth: HOPE worldwide initially grew steadily as it expanded to new geographies and added programs. Effects from 9/11 combined with changing relations with its original donor group have led to inconsistent growth since 2000.

Funding mix: While cash donations from individuals have grown considerably in absolute terms, in-kind gifts have been the organization’s growth engine.