The Make-A-Wish Foundation originated in 1980 when a terminally ill boy had his wish to become a police officer granted. Later that year, Make-A-Wish began fundraising to grant more wishes; today its revenues exceed $160 million and its 71 U.S. chapters have granted the wishes of more than 144,000 children worldwide. During the 1990s Make-A-Wish grew rapidly by opening loosely-governed local chapters. Once chapters covered the U.S. growth slowed—though the nonprofit has continued to enjoy strong support from individual and corporate donors. The purity of the nonprofit's mission make it an easy sell to fundraisers, partners, and volunteers—and Make-A-Wish leaders have worked hard not to muddy the waters.

Don't muddy up the purity and simplicity of the mission.

The origins of the Make-A-Wish Foundation of America trace back to 1980, when a terminally ill little boy named Chris Greicus had his wish granted. All his young life, Chris had dreamed of becoming a police officer. On April 29, 1980, he was sworn in as the first ever and only honorary state trooper in Arizona history. Later that year, Make-A-Wish received tax-exempt status as a nonprofit organization and began fundraising to grant more wishes.

Make-A-Wish has granted the wishes of more than 144,000 children worldwide, in pursuit of its mission to “grant the wishes of children with life-threatening medical conditions to enrich the human experience with hope, strength, and joy.” It now has 71 chapters in the United States. The Make-A-Wish national office provides operational, financial, training, marketing, and development support to the U.S. chapters. More than 25,000 volunteers serve as wish granters, fundraisers, and special events assistants.

The organization’s revenues now exceed $160 million. It has achieved this scale through a combination of individual and corporate support. Individual funds come from donations and special events. Corporate support is a mix of in-kind gifts (i.e., the granting of wishes) and cash contributions. 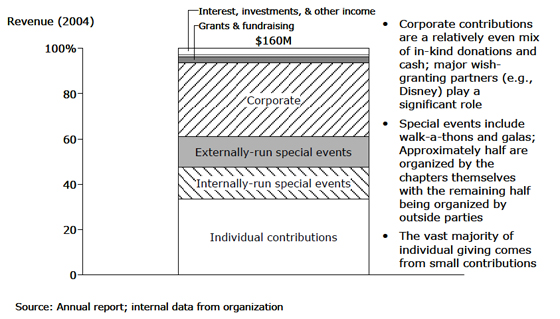 Revenue growth: Make-A-Wish has grown solidly from its inception. Growth slowed somewhat after the organization covered the U.S. with chapters.

Funding mix: Make-A-Wish’s funding mix has been largely constant for the past decade. Early in its history, special events comprised a larger percentage of total fundraising. 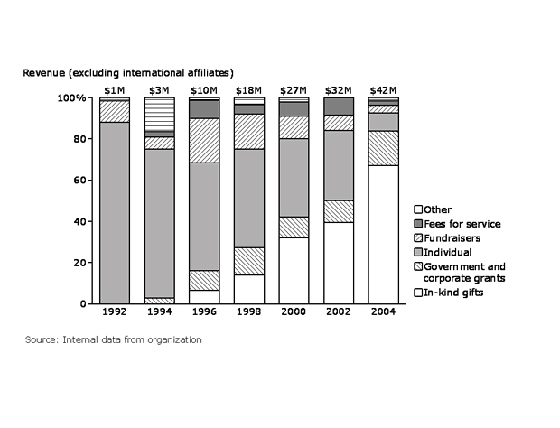