The National Wild Turkey Foundation (NWTF) funds scientific wildlife management to promote wild turkey hunting. Since its founding in 1973, NWTF has helped grow the U.S. wild turkey population from 1.3 to 7.0 million. This grassroots conservation organization, which grew slowly through its first two decades, has expanded dramatically since the late 1990s when NWTF made profitability a top goal and honed its banquet-in-a-box fundraising model. With the help of local turkey enthusiasts, NWTF runs over 2,000 banquets per year—averaging $10,000 each in net receipts. In addition to producing revenues, the banquets have grown NWTF membership from 20,000 in its early days to its current size of 500,000 members.

You don't get a bit of money for conservation from someone chaining themselves to a tree. Hunting is conservation.

The National Wild Turkey Federation is a grassroots nonprofit organization that supports scientific wildlife management on public, private, and corporate lands to promote wild turkey hunting as a traditional North American sport. The organization began in 1973 as an intermediary between the wildlife agencies of neighboring states seeking to repopulate areas where wild turkeys had vanished. It now has 500,000 members as well as 2,000 local chapters that pursue conservation projects at the state and local level. Its national office focuses on national conservation efforts, biological research, and advocacy to increase hunting opportunities and safety.

NWTF derives the majority of its revenues from a “banquet-in-a-box” model, whereby regional fundraising directors ask local turkey enthusiasts to run fundraisers for new and existing members. Its national headquarters supplies merchandise for sale (e.g., shotguns, hats, and other hunting gear) and raffle prizes. NWTF runs well over 2,000 banquets per year, averaging $10,000 each in net receipts.

Since its founding, the wild turkey population in the U.S. has grown from 1.3 to 7.0 million, thanks in large part to NWTF. Now the organization is expanding its scope to attract new groups to wild turkey hunting, including women, youth, and people with disabilities.

Beneficiaries: Hunters; the public at large 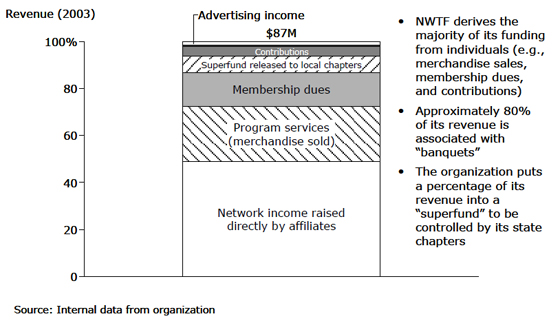 Revenue growth: NWTF grew rapidly through the late 1990's once management honed the "banquet-in-a-box" style of fundraising and focused on running a professionally managed organization. 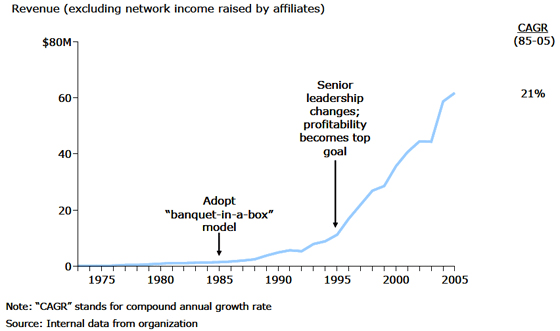 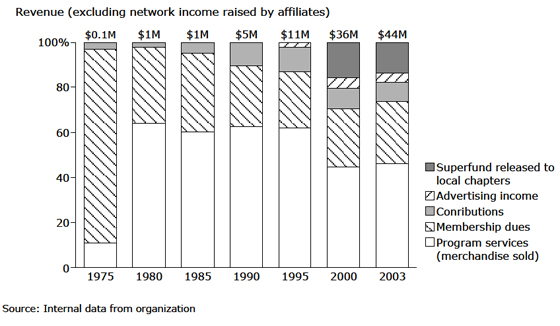