Founded in 1970, NRDC uses legal and scientific expertise along with a base of 1.2 million members and online activists to protect the planet’s wildlife and wild places and to ensure a safe and healthy environment for all living things. The organization is perhaps best known for its involvement in passing the Clean Air Act, and is currently involved in campaigns regarding Navy sonar’s impact on marine mammals, oil drilling in Alaska, and climate change.

With programming spanning air, climate, energy, oceans, health, urban, and nuclear issues, NRDC works to save threatened places and species and to eliminate toxics and pollution. It uses legal and legislative channels to force environmental action and works with members, local and national groups, businesses, and the scientific community to build coalitions for change. NRDC also carries out public campaigns on environmental awareness and action. Due to constraints on the lobbying activities of 501(c)(3) nonprofit organizations, the NRDC Action Fund, an affiliate organization, was created in 1999. The Action Fund works to support pro-environmental legislation and to defeat anti-environment legislation through paid advertising, phone banking, and the mobilization of grassroots pressure.

NRDC’s diversified, largely unrestricted revenue base gives it flexibility to maintain support for critical issues, even as they wax and wane in public or political attention. The Ford Foundation provided its initial funding and foundations have remained an important if declining percentage of its revenue base. In the 1990’s NRDC increased its focus on individual giving, and nearly 70% of NRDC’s revenue currently comes from individuals. The organization’s appeal to individuals is aided by the wide range of environmental issues it works to address. NRDC builds its membership with direct mail and internet campaigns.

Beneficiaries: Users of open space; the public at large 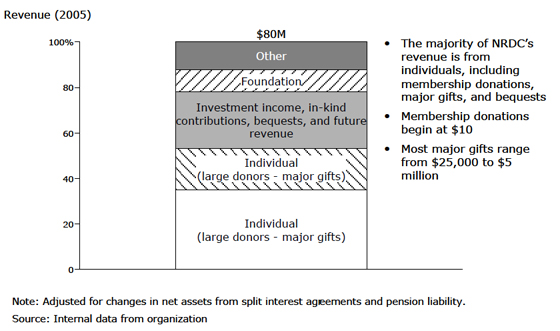 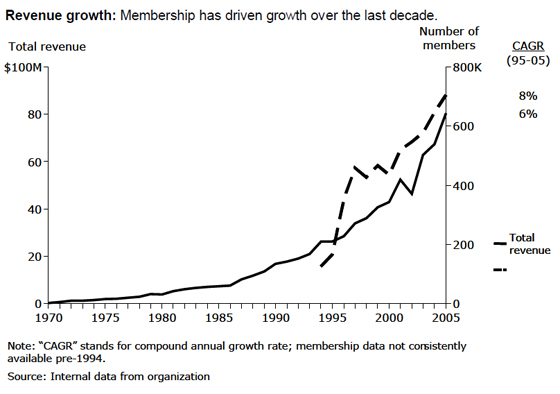