Complexity can make a nonprofit organization a tough sell to donors. But Opportunity International has managed to use complexity to its advantage. This Christian ecumenical organization creates jobs and stimulates small, primarily women-owned businesses through micro-enterprise development. In many ways Opportunity’s complex program model has dictated its funding strategy. The nonprofit engages in data-rich, one-on-one conversations with high net-worth individuals. This investment in donor relationships has paid off: Opportunity’s revenues have grown steadily over time, with 80 percent of individual dollars coming from 4 percent of donors who give at least $25,000.

Help [donors] fulfill their vision for life...they all have a passion.

Opportunity International (“Opportunity”) is a Christian ecumenical organization that creates jobs, stimulates small businesses, and strengthens communities internationally through micro-enterprise development. Opportunity runs 42 “implementing partners”? locally staffed lending organizations (often formally chartered banks) that make micro-loans to the poor. Individual clients receive small loans that average $144 and are then jointly responsible for repayment in a group called a “trust bank.” In 2004, the organization loaned $242 million to 675,500 clients worldwide, with a repayment rate of 98%.

Opportunity International draws its funding from three main sources: interest on its micro-loans, individual donations (largely from high net worth donors), and government funds (primarily USAID grants). Its fundraising pitch is complex and data-rich (reflecting the program itself), requiring sit-down, face-to-face conversations with potential donors. Twenty regionally-based marketing directors develop long-term relationships with high net worth donors, with each director typically raising $1.5 million per year once they have an established network of donors. Roughly half of individual donors are “faith-based,” acting out of a commitment that echoes Opportunity’s mission statement to follow, “Christ’s call to serve the poor.” The others often are motivated by Opportunity’s focus on entrepreneurship to solve problems of the poor. 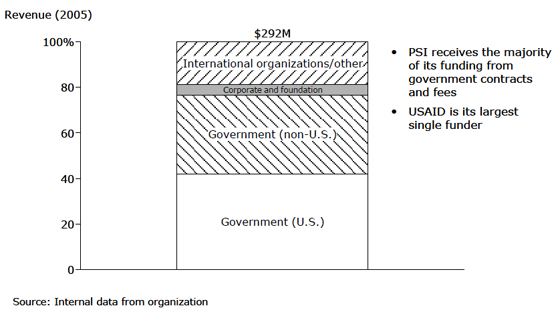 Revenue growth: Contributions have grown steadily over time. Earned income from micro-loan interest has tracked with the increasing the number of clients served. 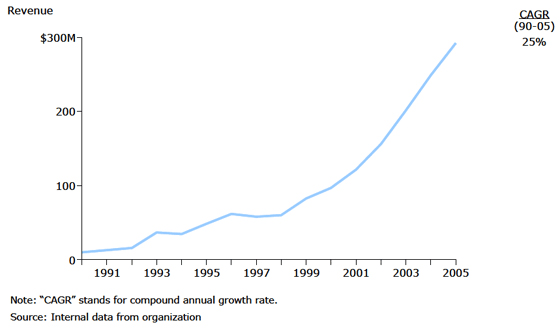 Funding mix: U.S. individuals consistently have provided Opportunity’s contribution base, with the share from international donors and government growing gradually.

Opportunity’s individual contributions come predominantly from high net worth donors. Nearly 80% of individual dollars are from the 4% of donors who give at least $25K.