The Oregon Food Bank (OFB) seeks to eliminate hunger in Oregon, which the USDA identified as the worst state in terms of hunger and food security in 1999. To meet this pressing need, OFB collects and distributes food to 20 regional food banks. While OFB has maintained a constant mix of in-kind donations (approximately 70 percent) and cash, it has constantly innovated in order to grow. For example, in the late 1980s OFB shifted from 75 percent USDA funding to 75 percent private donations. And in the late 1990s OFB shifted from large donations of packaged and canned goods from a few retailers to large quantities of fresh and frozen donations from farmers and processors.

Nurture your volunteers and build your individual donor base.

Since 1982 Oregon Food Bank has worked, “to eliminate hunger and its root causes…because no one should be hungry.” The organization is the hub of a statewide network of 894 hunger-relief agencies. This network serves all of Oregon as well as Washington’s Clark County. In 2005, the Oregon Food Bank collected and distributed 38.1 million pounds of food. OFB also works to eliminate the root causes of hunger through advocacy, nutrition education, learning gardens, and public education.

Services: Provides food to the hungry through its own locations and through a network of organizational partners 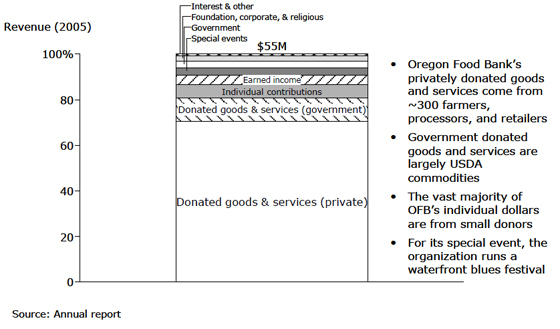 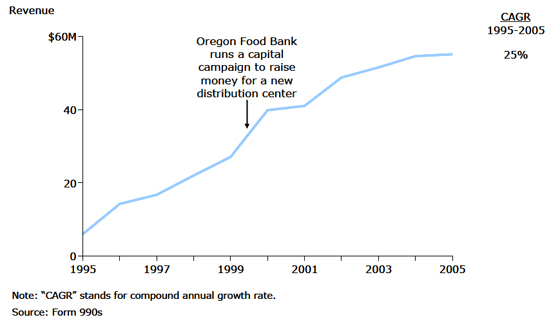 Funding mix: OFB’s general mix of in-kind versus cash donations has remained constant in recent years, but within each category constant innovation and capacity development has been required to sustain growth. 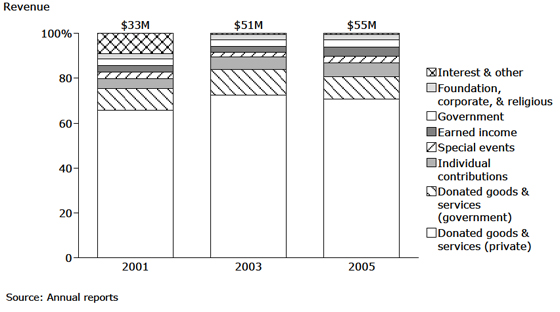