Distributing over 25 million pounds of food annually to hundreds of local agencies, the Greater Boston Food Bank is the largest hunger-relief organization in New England. At the Food Bank efficiencies have driven growth, as the nonprofit has become more effective at processing and distributing products. Such efficiencies have allowed the Food Bank to increase food distributed and areas served, creating a broader base for fundraising. The organization has also adopted best practices from for-profit companies and pursued key private sector hires. Now a new challenge: Having maximized its current operational activities, to continue to grow, the Food Bank must invest in new operational capabilities, such as those inherent with perishable foods.

We have taken the Food Bank from being a charity to a charitable business. It was the only way we could grow.

The Greater Boston Food Bank is the largest hunger-relief organization in New England, and one of the largest food banks in the country, distributing over 25 million pounds of food annually to hundreds of local agencies (e.g., local food pantries, soup kitchens, day-care centers, youth programs, senior centers, and homeless and residential shelters). Founded in 1981, The Food Bank is part of the America's Second Harvest™national network, the nation's largest hunger-relief organization. The Food Bank employs 65 people and uses the services of 14,000 volunteers annually to acquire, inspect, sort, warehouse, and distribute enormous quantities of food to agencies in nine counties and two islands in Massachusetts.

Services: Distributes food as well as home and personal care products to hundreds of local hunger-relief agencies in a dedicated partnership to feed the region's hungry 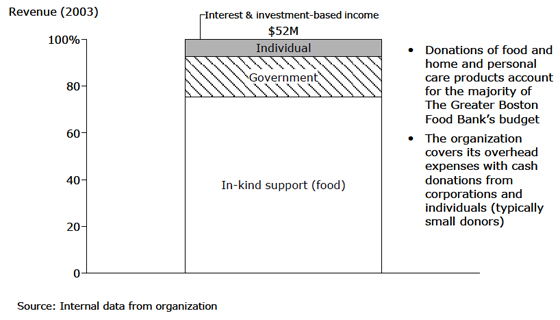 Revenue growth: The Food Bank’s growth has been fueled by more efficient and effective identification, processing, and distribution of products. 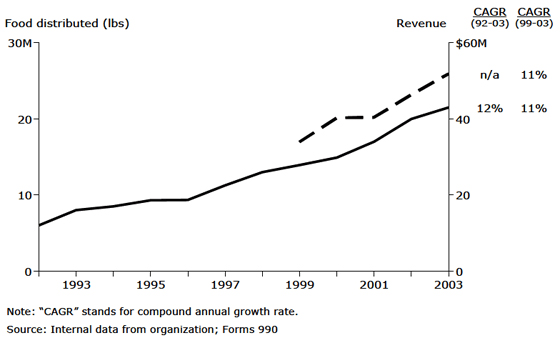