Profile: The Trust for Public Land

Profile: The Trust for Public Land

Simply put, the Trust for Public Land (TPL) conserves land for people to enjoy it. TPL does this by buying land from private sellers and selling it to public agencies. During the last 35 years TPL has raised over $35 billion in land conservation-related funding and facilitated more than 2,700 land transactions. But most of these accomplishments have taken place since the mid-1990s. At that time TPL moved into the “conservation finance” arena, running state and local campaigns to increase land conservation awareness and funding. A few years later growth exploded when new President Will Rogers made it an explicit goal.

[TPL takes a] pragmatic, flexible outlook. We are not confrontational or ideological in the process we use.

Founded in 1972, the Trust for Public Land (TPL) conserves land for people to enjoy. It does so by helping communities raise funds for conservation and by facilitating transactions that move land from private landowners to public agencies in the U.S. TPL is a national organization made up of regional and local offices and state advisory boards. It is managed by a national office in San Francisco under the oversight of a national board of directors.

TPL’s position as an environmental nonprofit with expertise in land transactions makes it an important part of the “value chain” that moves land from private hands to public agencies. TPL buys land from willing, private sellers at or below market prices and sells it to public agencies at or below market price. TPL supports itself through donations from landowners either in the form of cash or land value donated to TPL. Public agencies occasionally pay TPL a fee for facilitating the transaction. TPL adds value for the government by: identifying important land for conservation; responding quickly in a dynamic real estate market; putting together complex multi-agency public and private funding partnerships; arranging often complex deals; holding the land while a government agency arranges funding; and acting as intermediary where sellers prefer not to deal directly with government agencies.

Beneficiaries: The public at large; park and recreation users

Revenue growth: Revenue growth has increased in the late 1990’s with the conservation finance program and the introduction of growth as a goal.

Funding mix: The majority of TPL’s revenue has come from the landowners with whom the organization works on transactions, with the balance coming from other philanthropy, fees, and investment earnings. 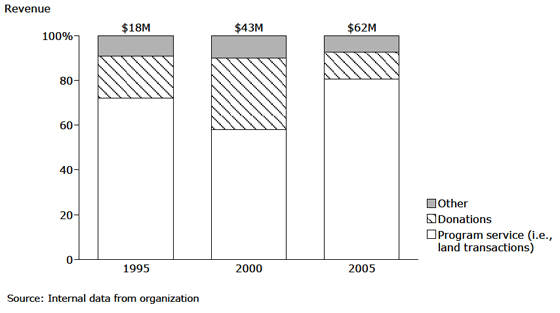