Youth Villages serves youth in or at risk of entering the child welfare and juvenile justice systems through a range of residential facilities, foster care, and in-home services. Relying heavily on state funding, Youth Villages has achieved significant scale by working with multiple states and multiple departments within each state—often collaborating with states to assess needs and develop programs. The organization’s willingness to take on significant risk in its contracts has also buoyed its funding. For example, the state of Tennessee pays Youth Villages an amount per child based on the child’s situation. The nonprofit then must service the child for that fee, regardless of how much service the child ultimately requires.

We had convinced the state that they shouldn’t be buying beds; they should buy outcomes, successful outcomes.

With a mission of helping children and families live successfully, Youth Villages serves youth in or at risk of entering the child welfare and juvenile justice systems. The organization provides residential facilities, foster care services, and in-home services. Its origins trace back to 1979.

Youth Villages has been able to achieve significant scale by cultivating diverse sources of state government funding. The organization has developed relationships with multiple departments in multiple states. Its willingness to take on significant risk in its state contracts also has buoyed funding. For example, in its largest contract, Tennessee pays Youth Villages a specific amount per child based on the severity of the child’s situation. The organization then must serve the child for that fee regardless of what degree of service the child ultimately requires.

Beneficiaries: Children who have emotional or behavioral disorders, have suffered physical or sexual abuse, and/or are at risk of substance abuse or suicide 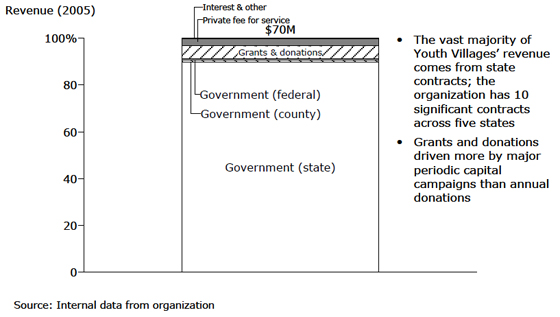 Revenue growth: Youth Villages has annual growth rate of over 20% since 1990.