There is a growing recognition across the social sector that community-driven change increases the odds of achieving lasting impact. So how can NGOs and funders begin to lean into this approach? Case studies of four proximate NGOs working in urban informal settlements in India and Africa illuminate their mindsets and pathways towards enduring change, providing funders and NGOs with insights to develop their own community-led approaches.
By: Pritha Venkatachalam, Jan Schwier, Keshav Kanoria, Erica Lezama , Amrutha Datla, Bill Breen 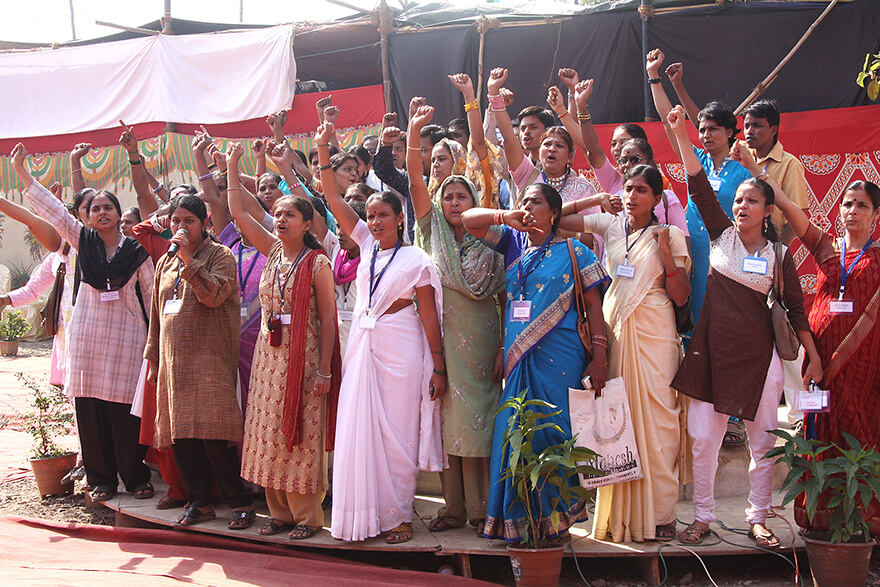 CORO has adopted a community-driven approach in which women and men from under-served communities in India mobilise grassroots efforts that advocate for equality and justice. Here, the first group of CORO's grassroots leadership development programme celebrate on their graduation day in 2009. (Photo credit: CORO)

A decade ago, a Muslim religious scholar named Hussain Khan was a vocal critic of the Mahila Mandal Federation (MMF), a Mumbai-based grassroots women’s group, which has been nurtured by an NGO called CORO for the past 20 years. He questioned MMF’s efforts to help women take on leadership roles in their communities in urban informal settlements. But instead of viewing Khan as an adversary, MMF believed he might one day become an ally.

Today, Khan hosts MMF meetings at his madrassa (school), which traditionally excludes women. And he has developed a course, “Quran and the Constitution,” which builds community members’ awareness of their constitutional rights and their moral responsibility to help neighbours in need.

What prompted Khan’s change of heart?

Along with MMF, CORO spent three years conversing with Khan about the challenges women living in urban informal settlements encounter, including domestic violence and low access to education. CORO was well-positioned to engage in those meetings, since it is largely led by Daliti and Muslim people who live in the communities in which they work. Khan was later selected into CORO’s Samta Fellowship, where he spent a full year reflecting on the values enshrined in the Indian constitution and acquiring leadership and movement-building skills that he took back to his community.

It is not an accident that Khan now champions the work of a grassroots group that he formerly opposed. It is an outgrowth of CORO’s core approach to supporting community-driven change: to meet people where they are and earn their trust. The idea is to unlock their “power within” to advocate for the rights of Dalits, Muslims, and other historically marginalised communities to have an equal opportunity to advance their lives.

To learn more about how this kind of ground up, community-driven change comes to life, a Bridgespan Group team spent several months researching and interviewing CORO as well as three other NGOs in the Global South: Mumbai-based Youth for Unity and Voluntary Action (YUVA); Kenya’s Shining Hope for Communities (SHOFCO); and Ubuntu Pathways (UP), which works in South Africa’s Gqeberha (formerly Port Elizabeth) townships.

Our research reaffirmed that community-driven change is challenging to execute. Multifaceted power dynamics related to gender, caste, class, and religion often pose significant barriers to change. However, we also learned that, despite all of this, the four NGOs pushed past those challenges to build long track records of success by playing a supporting role as community groups built their own solutions.

Tightly focusing on a few NGOs, rather than on many, gave us a close-up look at on-the-ground approaches to working with community members as they take steps towards leading their own change. One of our main insights was the similarities in how community-driven organisations think. Specifically, we identified five mutually reinforcing mindsets that help orient these NGOs around community members’ priorities and lived experience. 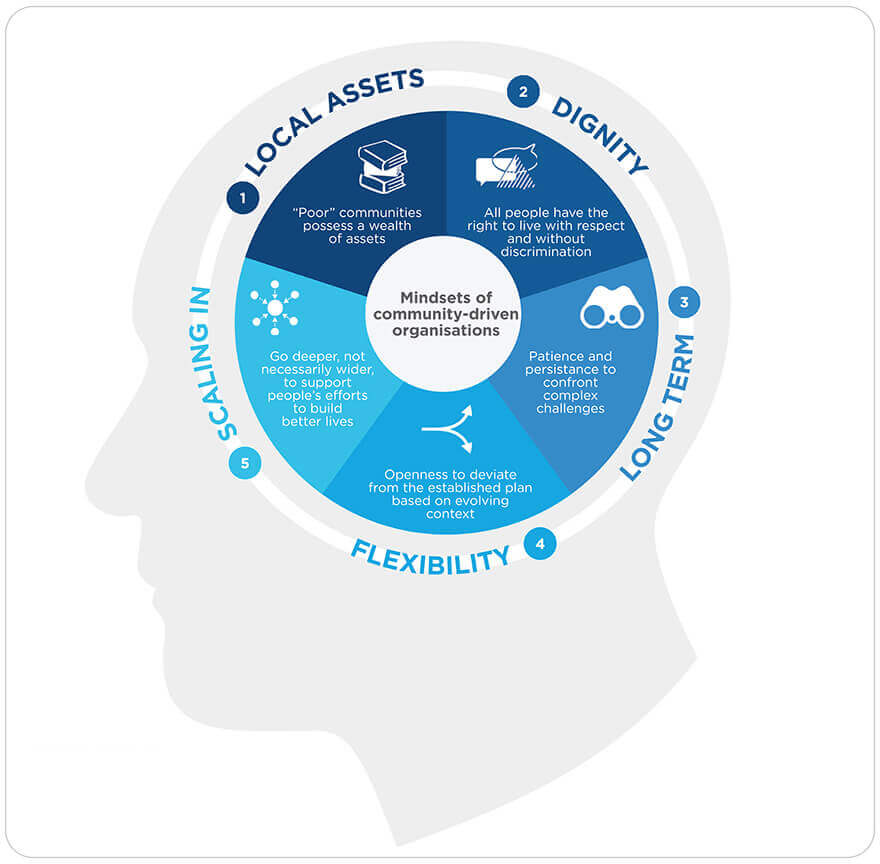 Local-Assets Mindset: Community-driven organisations know that “poor” communities possess a wealth of assets. The four NGOs embrace the logic that community members have the social and human capital – stored up in local knowledge, skills, experiences, motivation, and relationships – to tackle their challenges better than any outside group can.

Dignity Mindset: Community-driven organisations recognise that all people have the
right to live with respect and without discrimination, so they can fulfil their potential. Thus, they are better able to push back against the inclination to bypass those whom some might consider to be especially “marginalised” or “vulnerable.”

Long-Term Mindset: Community-driven organisations summon patience and persistence to confront complex, vexing challenges. They know that issues such as lack of access to quality early childhood education and threats of eviction are systemic in nature and don’t have quick fixes.

Flexibility Mindset: Community-driven organisations believe that when community members point to a better way, they need to quickly pivot from the established plan. When a crisis emerges, such as the COVID-19 pandemic, they are quick to follow the community’s lead and support a new service or strategy.

“Scaling-In” Mindset: Community-driven organisations think about going deeper, not necessarily wider, to support people’s efforts to build better lives. They put a premium on holistic approaches to impacting individuals in specific communities, as opposed to spreading out geographically to reach as many people as possible.

Our other major insight was on the shift from thinking to doing. The NGOs all pursue some combination of five interrelated pathways for supporting community-driven change. To be sure, NGOs with a programmatic approach to advancing social impact also pursue these pathways. However, the  community-driven organisations we studied apply the mindsets in following these pathways. 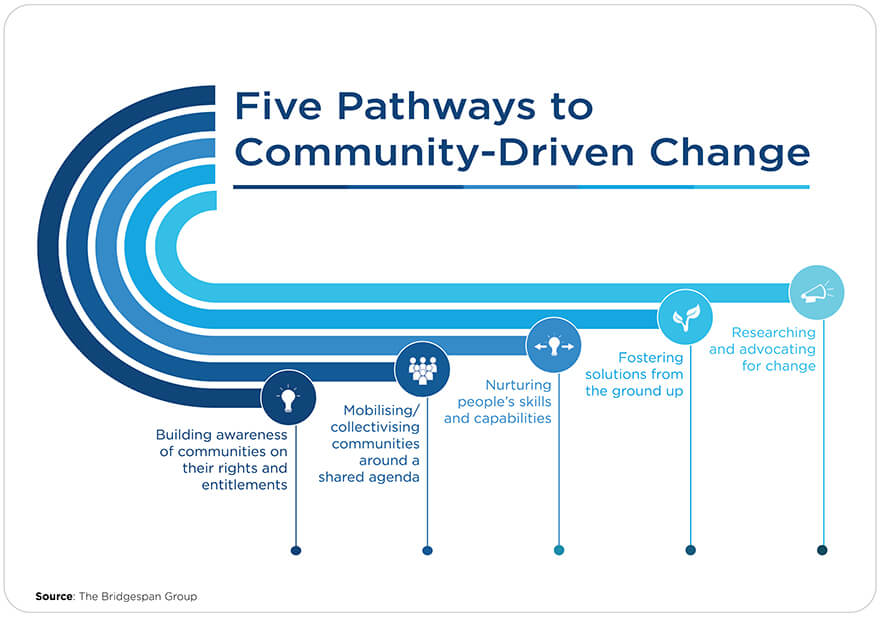 Building awareness of communities on their rights and entitlements. Using a variety of approaches, the four NGOs provide supports for people living in urban informal settlements to better understand their rights and the services that are available to them, so that they are better equipped to demand them and advocate for change.

Mobilising/collectivising communities around a shared agenda. Because they lean into the mindset of tapping into local assets, the NGOs mobilise communities and channel people’s collective efforts towards a shared goal and an agenda for achieving it.

Nurturing people’s skills and capabilities. The NGOs help people develop the technical skills and soft capabilities, such as self-awareness and values alignment, to design and implement social-change projects and hold government accountable.

Fostering solutions from the ground up. The NGOs support community leaders’ social change initiatives through ongoing mentorship and technical assistance by opening up stakeholder networks. In some cases, they co-create solutions with community leaders.

Researching and advocating for change. By conducting research that is informed by their deep community work, the NGOs provide them with additional tools to push for policy changes. Articles and research papers also help build the case for collective, cross-sector action. 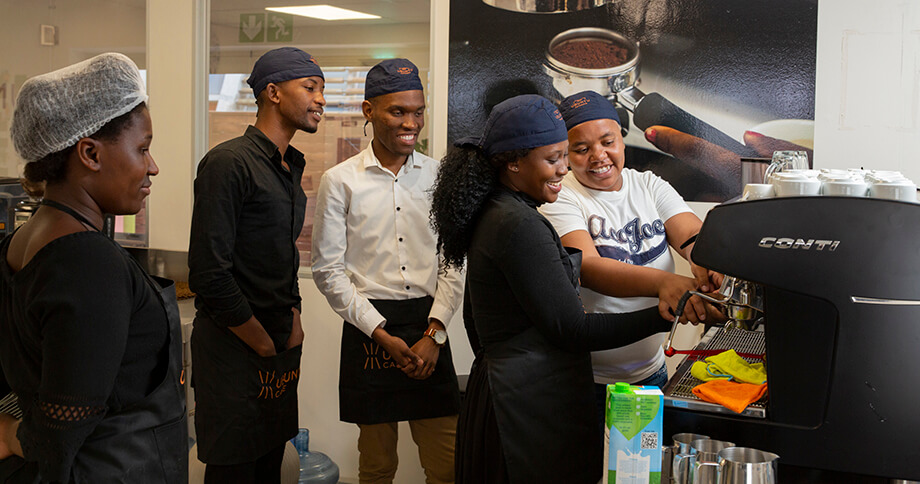 Over the past decade, there has been a growing recognition across the social sector that community-driven change, as we describe in the report, increases the odds of achieving impact that lasts, not least because the community feels a sense of ownership. So how might other NGOs and funders begin to lean into community-driven change and adapt the mindsets and pathways that work best for them?

We conclude with questions that aim to help you reflect on your organisation’s mindsets; connect with community-centric peers and community leaders; and embed practices that lead to people owning the change they seek.

[i] As in this explainer from The Quint, Scheduled Castes are sub-communities within the framework of the Hindu caste system that have historically faced deprivation, oppression, and extreme social isolation in India on account of their perceived "low status."

This work is licensed under a Creative Commons Attribution 4.0 International License. Permissions beyond the scope of this license are available in our Terms and Conditions.
The Bridgespan Group would like to thank the JPB Foundation for its generous and ongoing support of our knowledge creation and sharing work.