The Public Education Network (PEN), an associated network of Local Education Funds (LEFs) provides a prime example. LEFs provide support and advocacy for public education; as PEN’s mission states, the network’s leaders and members work together to “build public demand and mobilize resources for quality public education for all children." In 2009, PEN’s leadership developed a strategy that included building a stronger network and defining more clearly what it meant to be an LEF.

Working with a group of affiliates, PEN’s leaders identified a short list of the dimensions that contributed most to any given LEF’s results. There were five program indicators, including the ability of LEFs to effectively use data and research to measure and improve student outcomes, and four organizational indicators, which included leadership, governance, funding strength, and human resources.

Then, for each of these core dimensions, the group articulated three stages, or levels, of effectiveness: emerging LEF, growing LEF, and high-capacity LEF. So for example, a given LEF might be a “high-capacity” organization on its ability to use data and research to improve student outcomes. But that same LEF might be considered “emerging” on the strength of its governance. 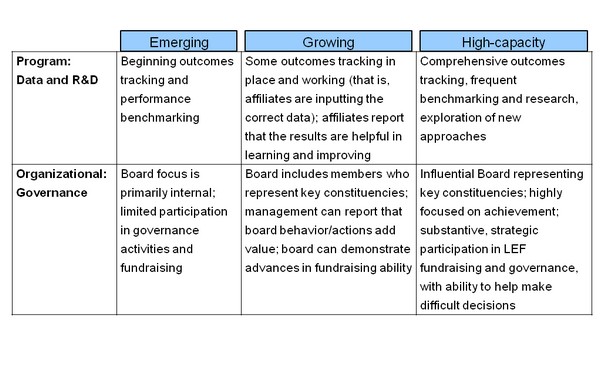 Over time, PEN’s goal is to help all affiliates reach the high-capacity level on every dimension. The developmental stages give PEN’s members a common standard around which to assess their current work, diagnose challenges, and gain a clear sense of which affiliates might prove to be valuable “go to” resources for advice and guidance in any particular area.

Wendy Nadel, who leads Yonkers LEF (Yonkers Partners in Education), notes that having clarity about the dimensions of effectiveness, and also being able to assess those dimensions against three clear stages, has helped to guide her organization's work since its inception four years ago. “We don’t just talk about getting better in a generic sense,” she said. “We have a very clear road map of what it means to be a high-capacity LEF with real specificity on our strengths and what we need to work on. We can now link local effectiveness with national impact.”

This case study is part of Create Paths step of the the Preparing to Grow Your Network's Impact guide.