The Buffetts Find "The Sound"

The Buffetts Find "The Sound"

What would you do with one billion dollars? Peter and Jennifer Buffett were faced with this extraordinary challenge, responsibility, and opportunity. 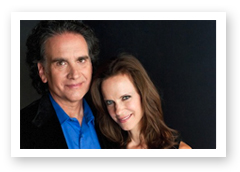 Peter Buffett was just 19 years old when he received his inheritance: $90,000 to use as he pleased. There were no strings attached, no expectations—but also no more money. The youngest son of investor Warren Buffett understood that this was the extent of his inheritance.

The question was, what to do with the funds? A car? An oceanfront condo? “I’d had the advantage of seeing my older siblings burn through most of their cash rather quickly,” Peter said, looking back thirty years later. “I didn’t want to follow that path.”

It happened that the money arrived at a time when Peter was ready to commit to a career in music. But he still had much to learn, both technically and aesthetically—not only about making music, but also about making music personal—making it his own. Peter remembers talking about this with his father, who counted among his favorite movies The Glenn Miller Story. “One of his favorite aspects of it was the great bandleader's obsession with finding ‘the sound,’” Peter wrote in his 2010 book, Life is What You Make of It. “This was the mysterious something that would make a Glenn Miller song or a Glenn Miller arrangement distinctive and immediately recognizable.”

Arriving at “the sound” was a big job; ultimately, Peter used his money to buy himself time to find it. “I played the piano, wrote tunes, experimented with electronic sounds and overdubbing,” he recalled. “Then I put a classified ad in the San Francisco Chronicle, offering to record all comers in my apartment studio. And I waited.”

Uncertainty. It’s a thing any artist must learn to use to his or her advantage—to resist easy answers, to take comfort in not knowing, to wait even when you’re itching to move on. This early lesson, learned as a musician, has served Peter as a philanthropist as well.

For, as it turned out, the $90,000 gift was the tip of the iceberg in terms of gifts he would receive from his father. In 1997, Peter received a second sum: $100,000 that he and his new wife, Jennifer, could draw from to donate to nonprofits of their choice. The Buffetts were novices when it came to philanthropic giving. “We didn’t have a clue,” Jennifer reflected. “But this got me out into the community to start learning!”

That gift led to a period of learning and exploration, and to the creation of the Spirit Foundation, so named because Peter and Jennifer wanted to stay under the radar and to be reminded that the spirit of giving was a value they held. In the initial years, they supported a range of social issues through Spirit, including education, social services and the arts; much of the funding was focused locally in Milwaukee. But after Jennifer experienced a moving visit to a children’s hospice and read compelling research about the importance of a child’s first few years to brain development, Peter and Jennifer decided to focus their support on early childhood issues and organizations. They directed their funds towards this cause for nearly a decade—not knowing there was yet another gift on the horizon.

We did site visits to programs across Asia and Africa together, and we talked to so many people to find the ‘opportunity of our time.’ Little trickles of information from hundreds of people around the world started to merge into patterns.

Peter, his ear ever tuned to sound, calls his father’s third gift “the big bang.” It arrived in 2006 as a fax, in which his father explained he would be pledging $1 billion to the foundation. Once again, there were no strings attached, but this time, Warren offered some advice, urging Peter and Jennifer to focus on a few activities where their giving could make an important difference, to take risks—and to expect to make mistakes.

What followed was a second period of learning and exploration. Given the massive expansion in their resources, Jennifer and Peter felt compelled to look beyond the United States and to take a more global view. They spent two years in “startup mode,” seeking a focus that would stick. “We did site visits to programs across Asia and Africa together, and we talked to so many people to find the ‘opportunity of our time,’ ” Jennifer said. “Little trickles of information from hundreds of people around the world started to merge into patterns.”

One pattern, in particular, struck a chord with the Buffetts: the imbalance of power between men and women. “In Africa or India, you really see that men have the power and the dominant position,” Jennifer said. “And yet women are saddled with the burdens and with holding families and communities together.” What emerged was an ambitious mission: to help transform a global culture of domination and exploitation to one of collaboration and partnership, empowering women and girls as the primary agents of change and addressing the power dynamic between the genders. The Buffetts renamed their foundation the NoVo Foundation, drawing the organization’s name from the Latin meaning of “change, alter, invent.”

Start small—and up the commitment

Even with $1 billion in their pockets and substantial legwork under their belts, the Buffetts quickly realized they had landed upon a problem far bigger than they were ready to tackle alone. Rather than reinvent the wheel, they chose to begin by making grants to experienced organizations focused on improving the status of women and girls in some of the world’s most challenging environments—for example, post-conflict. They started funding established, well-run organizations that were doing recognized and important work, such as the International Rescue Committee (IRC) and Women for Women International.

The Buffetts came in big so that they could help these organizations progress to the next level and really have impact. For example, they worked with Women for Women intensively over three years, donating more than $5 million to build organizational capacity at every level—operations, staffing, IT, database, communications, board development, theory of change and strategic planning—so that the organization would be built to last. Many funders don’t like to fund such internal processes, but the Buffetts took a more business-like, venture funding approach to their philanthropy.

To cite a few other examples: They invested over $30 million in the IRC to help build comprehensive, systemic solutions (village to government level, across judicial and law enforcement sectors) to help end violence against women and girls in Liberia and Sierra Leone. They also helped rebuild the broken education sector through supporting “Healing Classrooms,” teacher trainings, vocational and skills training for young adults, and provided planning money for West African educators so those organizations could rebuild themselves the way they envisioned. In addition, they helped build the capacity of the government of these countries to take over these efforts, with a grant for a secretariat in Liberia, for example.

As the Buffetts learned more about the causes they were supporting, and the places where their funds could make the most difference, they upped their levels of commitment—and risk. In May 2008, for example, the NoVo and Nike Foundations announced a combined $100 million investment in the “Girl Effect” initiative, aimed at helping adolescent girls in developing countries. One result? In the last two years, the Berhane Hewan initiative, located in a region of Ethiopia where 43 percent of girls are married by age 15, has successfully helped 11,000 girls (97 percent of participants) to stay in school and delay marriage.

Despite tasting some initial successes, the Buffetts quickly realized that violence against girls and women was an enormous impediment to progress in empowering women. So they began reflecting on how they could do better over time with the lessons they had learned. They considered broadening their scope to include fundamental safety issues like sex trafficking and abuse, but they were equally concerned about losing focus.

“The need seems endless,” Jennifer noted. “I consistently say: We’d really love to be doing these five other things, but we don’t have the resources for them. So we’re constantly talking about priorities. What are the greatest levers? How can we get the best results?”

Ultimately, they decided to expand their level of risk and leadership, and confront violence head-on. “We are going for some of the toughest things,” Jennifer explained. “With our name, it’s daring to tackle rape, sex trafficking and sexual abuse.” But the Buffetts hope that if they can focus attention and resources on these entrenched problems, others may be more willing to follow. In addition, the Buffetts decided that NoVo should invest in Social and Emotional Learning in order to help youth of both genders learn how to create a more caring and balanced world—one which supports new roles for women, and supports boys and men socially and emotionally to have more freedom, ability and skill to express and manage emotions and conflict constructively. With both of these initiatives, Jennifer and Peter have expressed readiness to “get their hands dirty” and to move from exploring the field to helping to lead it.

A coda of sorts

In September 2008, Peter and Jennifer Buffett were awarded the Clinton Global Citizenship Award for their “innovation in philanthropy and commitment to empowering adolescent girls and women around the globe.”

The next month found Peter on a different stage. For the boy with $90,000 did eventually find “the sound”—and, fifteen albums later, continues to find it. When he kicked off a fall 2008 tour with a concert at LA’s Paley Center, he invited his father to share the stage with him. “He can play a pretty mean ukulele,” Peter said.


Sources Used for This Article