The Steppingstone Foundation: A Case Study in Growing to Full Potential

The Steppingstone Foundation: A Case Study in Growing to Full Potential

You know that your program is having an impact; you've been operating for a while and you're seeing results. Your Board and staff are eager to do more. But how much more, realistically, can your organization accomplish? And how can you grow without imperiling the successful work you're already doing? This was the situation facing The Steppingstone Foundation's management and Board when they joined forces with Bridgespan in 2002. While they were doing a great job preparing kids for college, they wondered if they could serve more kids. If so, how many more? And what changes would they have to make to support growth?
By: Kelly Campbell , Rita Louh

“Education is the great equalizer.” These are the words of Horace Mann, architect of the American theory of public schooling. And this belief—that most children regardless of circumstance can earn life-transforming opportunities if they apply themselves in a focused, demanding academic environment—serves as the underpinning for everything The Steppingstone Foundation does. Since 1990, Steppingstone has provided college access to Boston students who would not otherwise have had the opportunity. Steppingstone puts 4th and 5th graders (“Scholars”) through an intense 14-month academic program, places them in top Boston independent and public exam schools, and provides ongoing support through high school graduation.

Knowing that Steppingstone’s program could have such a positive impact made management and the Board eager to expand their work. Between 1990 and 2002, entering class size had jumped from 11 Scholars to 110, with Steppingstone staff serving over 500 Scholars yearly between its 14-month Academy program and post-placement support services. But as the Scholar growth rate slowed from 25 percent to 10 percent, they wondered if Boston growth prospects were waning. If they wanted to accelerate growth, would they have to look to new cities or was there still more work to be done in Boston?

Steppingstone’s management and Board didn’t know what level of growth—if any—was possible in Boston. At the same time, they were concerned that results might suffer in the pursuit of growth. To establish realistic growth targets for Boston and to assuage their quality concerns, they’d have to understand the Boston academic environment inside out. They also would have to look hard at their resources and capabilities, identifying any gaps and finding the funds to invest where necessary.

Specifically, Steppingstone’s management and Board along with the Bridgespan Group focused on answering three questions:

The Steppingstone/Bridgespan team’s first priority was to see if there was still room to grow in Boston. Determining if there were more students who could benefit from Steppingstone’s services would be tough, however, as Steppingstone targeted a specific student profile not readily measured by public data.

Over the years, Steppingstone’s staff had developed a sense for the types of students they could help best. They had found that talent, determination, and family support were all critical to succeeding in the demanding Steppingstone regimen. So beyond targeting kids who were unlikely to access quality 4-year colleges on their own, staff also looked for candidates who possessed basic academic building blocks, strong personal commitment, and solid support structures at home.

They tested for these traits with an extensive screening process that included a written essay, academic exam, and personal interview. This approach clearly wasn’t a viable way to figure out how many Boston students fit the Steppingstone mold. Balancing the desire for analytical rigor against practical constraints, the team devised a streamlined two-step screening process that used historical data and identified proxies where such data didn’t exist.

In place of Steppingstone’s academic exam, the team employed a proxy—Massachusetts standardized test score (MCAS) data. With the standard screening process, Steppingstone staff disqualified applicants at both ends of the score spectrum; students with high scores likely could gain college admission on their own, while those with very low scores probably required more support than the Steppingstone program could provide.

To mimic this process, the team defined a range of acceptable MCAS scores based on the MCAS performance of past applicants. Just under 30 percent of Boston-area students fell within the specified range. Accordingly, 1,500 of the 5,160 Boston-area 5th graders survived the team’s academic screen.

Given the intangible nature of the personal and family attributes essential for Scholars’ success, approximating this screen required creativity. The team estimated this pass rate based on historical Steppingstone experience. At this stage of the screening process, roughly 45 percent of the remaining candidates typically passed. Applying this rate brought the pool of potential Scholars down to 670 students. (Please refer to Figure A: Screening for potential Boston-area Scholars.)

The team next turned to evaluating Steppingstone’s ability to secure additional slots. After the Scholars went through the 14-month preparation component of the Academy, Steppingstone placed them in either independent schools or public exam schools. Potential roadblocks at this stage included obtaining more placement slots, financing the cost of these slots, and keeping college placement rates high.

The team probed into both independent and public exam school slot availability by interviewing admissions officers from 24 of their 59 potential school partners. Independent schools offered limited upside. Admissions officers indicated that they would consider adding one to two slots per school (15-20 in total), but that they could not provide financial aid. With tuition for each Scholar running $150,000 over Steppingstone’s six-to-seven-year involvement, these slots would be prohibitively costly.

Public exam schools proved more promising. Nine hundred seventy-five public exam school slots were open annually, with applicants accepted purely based on academic performance. Given that historically 90 percent of Steppingstone Scholars had qualified academically for public exam school admission and that these students fell largely in the middle, not the bottom, of the applicant pool, academics likely would not be a constraint to placing additional students. And state funding eliminated the financial barrier.

With public exam schools emerging as a logical path to growth, concerns arose for some members of Steppingstone’s management team and Board. Maintaining outcome quality was paramount, and historically 4-year college acceptance rates were lower for Scholars coming out of public exam schools.

Quality concerns addressed, the Steppingstone management team and Board decided to move ahead with an ambitious strategy for growing in Boston. The team devised a growth plan grounded in their research. The plan called for Steppingstone to double the number of Scholars they served by 2007. (Please see Figure B: Steppingstone’s growth projections through 2007.) With growth of this magnitude, Steppingstone knew they’d need to make major internal investments.

Figure B: Steppingstone’s growth projections through 2007 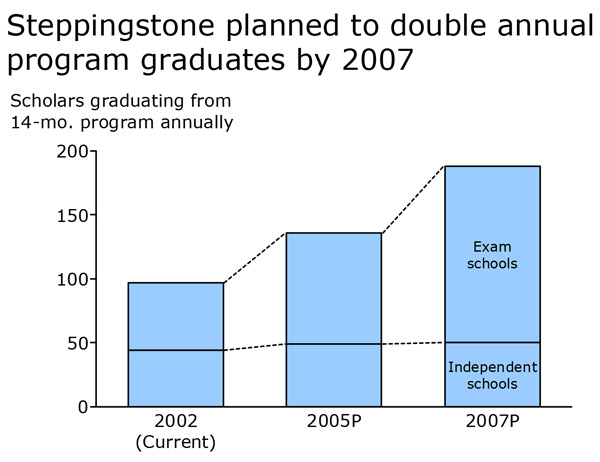 Like many young nonprofits, Steppingstone was used to working with a very lean organizational structure. If it doubled the number of Scholars, however, relying on just two administrative staff members would no longer be feasible, and buttressing barebones information technology systems with manual interventions would become unwieldy. Investments in staff, facilities and information technology would be critical to maintaining strong high school graduation and college attendance rates.

They also recognized that Steppingstone would need more capacity at the senior management level. The jobs currently being done by the small management team soon would become more time-consuming and complex. They’d need more staff and different skills to get the work done.

For example, they’d need someone whose primary responsibility was finding more students. Management and the Board were well aware that growth wouldn’t just happen. Finding and recruiting the qualified applicants they now knew existed would be a challenge, as evidenced by Steppingstone’s slowing growth in recent years. A new Director of Marketing experienced in grassroots marketing and community outreach would be necessary to devise creative ways to reach more students.

They also would have to spend more time tracking outcomes and identifying areas for improvement. Although they now believed strongly in the future success of public exam school Scholars, a new Director of Organizational Learning would play an essential role in confirming these beliefs and identifying any necessary adjustments. More generally, this new hire would make sure that Steppingstone maintained its strong outcomes as the program grew.

And all of this growth would come at a price; Steppingstone would have to raise a total of $15.6 million over the next five years, $6.3 million of which would be to support growth. Although Steppingstone enjoyed strong funding relationships in Boston, resources were not unlimited. And like many other organizations, Steppingstone viewed the funding environment with some concern. Raising the money necessary to support Steppingstone’s larger scale would take more time and dedicated efforts—a grant writer to support fundraising was clearly in order.

Beyond these and other new hires, improving management capabilities would be critical, as with rapid growth the complexity of managing the organization would escalate dramatically. Investments would include increasing professional development training, providing clear career tracks, and increasing salaries to levels comparable to those at similar organizations.

Investing in Facilities and information technology

While Steppingstone’s facilities and information technology met immediate needs, these assets would not support the magnitude of growth planned. For instance, Steppingstone didn’t have a long-term lease on a “home” for the summer program, so staff members had to spend several weeks each year looking for space. Securing a long-term facility would enable them to accommodate the additional Scholars and to improve operating efficiency.

Upgrading Steppingstone’s information technology would also be essential. Outdated systems were draining staff time and energy already, and much of the application and tracking processes had to be done manually. A good database system would be a key element of this upgrade. This, too, went into the budget.

With ambitious growth targets grounded in solid research and a plan to build the organization, Steppingstone was poised to expand their reach dramatically. They had translated their deep-seated desire to do more into a viable action plan for doubling the number of Scholars they served. Just as importantly, they had mapped out an approach that would allow them to maintain their strong success rate.

As of December 2003, Steppingstone was on track to reach its 2007 targets. Co-founder and President Michael Danziger remained committed to growth, noting that, “While growth is fraught with challenges—known and unknown—not growing is not an option. We are proceeding prudently, but insistently.” Management had carried through with all of their planned hiring efforts, and the information technology upgrades were well underway. Funding was also going well; in response to the plan, a national foundation had awarded Steppingstone a $1 million grant—the largest grant in Steppingstone’s history.

While Danziger was thrilled with the organization’s progress, there had been some growing pains. They still were looking for a facility that fit their needs. And they were embarking on a new branding campaign to help attract qualified Scholars to the program. According to Danziger, “Teachers, parents, and staff from community-based organizations all need to know that Steppingstone offers life-transforming opportunities to children who are willing to commit to the rigors and standards of the program. We want every mother and father in Boston neighborhoods like Dorchester, Mattapan, Charlestown, Roxbury, and Brighton to know who we are and what we do. This will take a well planned and executed marketing effort, and I am confident we can pull it off.”

A Framework for Assessing Growth Potential

Underlying the process the team used to develop Steppingstone’s growth path is a general approach for assessing an organization’s growth potential. While each organization faces a different set of gating factors (or elements that constrain growth, such as supply of qualified staff, physical space in the organization’s facilities, and access to funding), the following five steps provide a basic outline for organizations undertaking similar growth assessments.

Sources Used for this Article