Why Some Donors Go Public with Their Philanthropy

Why Some Donors Go Public with Their Philanthropy 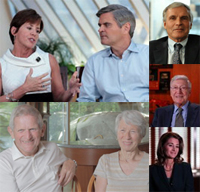 Should you give anonymously or go public with your philanthropy

As with all questions to be tackled during your philanthropic journey, a number of considerations affect this decision. However, many philanthropists who begin on a path of anonymity eventually go public.

Why? For many, going public offers a powerful way to inspire others and gain support for particular causes, even when going public is a result of being "found out."

The upside of being "found out"

Take Ray Chambers, Co-Founder and former Chairman of private equity firm Wesray Capital Corporation and UN Special Envoy for Malaria and UN Special Envoy for Financing of the Health Millennium Development Goals (MDGs). "I think the issue of whether or not you’re recognized for your philanthropy is a very sensitive issue," says Chambers. He points out that many people will only give money if they’re recognized for their good work. "If that’s what provokes them to give money and then gives them a feeling of satisfaction, I think that’s something we should applaud and embrace," he says. "There are others who get the greatest satisfaction out of giving anonymously," he says. It was the latter path that Chambers initially embraced in his own giving journey. There was just one problem: It soon became clear that everyone knew who "Anonymous" was.

Ray Chambers: Getting others on board
To see a complete archive of Ray Chambers' videos, see here.

More From the Blog Since that recognition, Chambers philanthropy has been far more public—and that's a good thing. Going public with his philanthropy has allowed him to share his story and talk candidly with others about his giving and the rich rewards it has brought to his life. "I realize that demonstration by example [creates] powerful impact, so I’ve had to adjust my view on wanting to stay anonymous and recognize [that] by telling my story, it can have a positive influence and encourage others to do the same."

Public philanthropy and the potential to inspire others

John Morgridge, the chairman emeritus of Cisco Systems, and his wife, Tashia, an educator and author, gave anonymously for years. But when Bill and Melinda Gates and Warren Buffett invited the couple to discuss joining what would become the Giving Pledge, they decided on a new—and more openly visible—philanthropy strategy. "The whole idea of the Giving Pledge is to encourage people to give away at least 50 percent of their material wealth during their lifetimes or in their wills," says Tashia. She says that the two, whose focus areas include education and the environment, "had basically already done that." Giving away 50 percent was not an issue, but going public was. "For many years, John and I had tried to be anonymous with our giving and had been semi-successful with that," says Tashia. "But then slowly we began to realize that we were the only ones who thought we were anonymous—because everybody else knew what we were giving."

"We've always felt it was important to stimulate others to be philanthropic," says John. Signing the Giving Pledge and officially going public with their philanthropy meant they could do just that.

To see a complete archive of John and Tashia Morgridge's videos, see here.

Steve and Jean Case are two philanthropists who also realized the value of going public. With Steve as Co-Founder, Chairman, and CEO of AOL and Jean as the marketing person, the two were prominent leaders in getting America online. Yet when it came to their philanthropy, the two say they stayed relatively quiet at first—and that, they believe, was a mistake. "I think if I look back over the 15-year history of the Case Foundation, I would say probably one of the real lessons we've had is [that] it would have made a lot more sense to be a lot more transparent early," says Jean. "We kind of hid behind a wall...we weren't really public with our giving."

To see a complete archive or Steve and Jean Case's videos, see here.

As with many philanthropists who don't want to attract attention to themselves, Steve says that this bias toward being virtually anonymous seemed like the right thing to do. However, over time the two realized that being quiet was doing a disservice to the causes they cared about. They realized that only by creating awareness around their philanthropy could they, as Steve puts it, "shine a spotlight on the causes that we cared about and try to galvanize support for those causes."

Public vs. anonymous philanthropy: A tough decision, but not necessarily all-or-nothing

</b>Of course, not everyone chooses to be public, or at least not 100 percent public. For example, Bernie Marcus, founder of the Home Depot and the Marcus Foundation, has done much in the public arena to raise awareness for autism, but he estimates that two-thirds of his giving goes without his being named as the benefactor. “I love anonymous giving,” he says. Still, if being public about a particular grant will help the nonprofit raise funds, Marcus agrees to use his name.

In the end, each philanthropist must decide whether to go public with his or her philanthropy, and just how public to be. And that can be tough. "I made a conscious decision...to really step out and use my voice, and it wasn’t an easy decision," says Melinda Gates, Co-Chair of the Bill & Melinda Gates Foundation. "I enjoy being a private citizen and having my privacy, but ultimately, when I started to look at the role of philanthropy and what it can do to effect change, I realized it wasn’t enough to just visit women in the developing world or to give them a tool like [a] vaccine; I had to use my voice on their behalf."

For help determining whether to go public with your philanthropy or to give anonymously, see "Should I Give Anonymously or Publicly?"