Investing in Hub and Network Philanthropy

As president of the Center for Community Change, Deepak Bhargava seeks to advance the organization’s mission to enable low-income people to effect positive change. 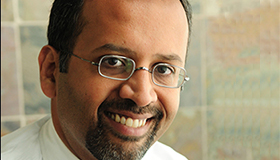 As president of the Center for Community Change (CCC), Deepak Bhargava seeks to advance the organization’s mission to enable low-income people to effect positive change in their communities and in the public policies that affect them. He understands better than most how inextricably linked individual social challenges are to one another: to make a sustainable difference on one front, it’s often necessary to alter a whole array of conditions.

This is a major reason why he is appreciative that CCC is a JPB Foundation (JPB) grantee. JPB is pursuing an innovative philanthropic strategy that surrounds “hub” organizations like CCC with complementary support from other organizations, which amplifies the hub’s impact and facilitates collaborative action to solve social problems.

Specifically, Picower is making big bets in organizations such as CCC—the hubs—and then going further by funding nonprofits whose work is complementary—the network. JPB asks network grantees to use a certain amount of their JPB grant funding to collaborate with the hub organization, either by aligning a portion of their strategy to the hub’s or by devising joint efforts.

By taking this approach, Bhargava says, “JPB has provided two kinds of value—for CCC and for the anti-poverty field more broadly.” The first, he says, is a structured space that gives leaders and other stakeholders in a given field an opportunity to think and plan together. As a JPB grantee, Bhargava has had regular meetings with other organizations in the network; these meetings have given rise to joint conferences and bold policy proposals. ‘The structure has fostered collaborative efforts,” he says, “It has also enabled some defensive planning—the chance to create ‘what if’ contingencies in light of potential federal budget cuts to safety net programs.” 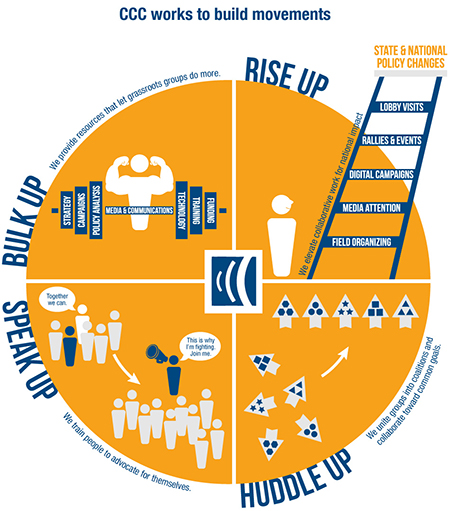 The second kind of value—related but distinct, Bhargava says—is “the creation of partnerships bilaterally among CCC and other groups that are producing results that would otherwise not have occurred.” For example, with The JPB Foundation leadership support, the CCC and the Center on Budget and Policy Priorities have been working together with the New Venture Fund, to create the Safety Net Defense Fund and develop a strategy to protect critical safety net programs. “We have built a coalition of policy and grassroots organizations around the country that coordinate and strategize together, with each of us taking the lead in areas of our respective strengths,” Bhargava explains.

Mary Lassen, Managing Director, at CCC, concurs. “The significant funding to CCC and the network has given us space to have much more thoughtful and nuanced discussions than we otherwise would have been able to,” she says. “It’s not that we never would have worked with these other organizations, but the depth and quality of the collaboration has been brought to another level through the JPB involvement. Our interactions with other organizations have become less transactional and more strategic.”

At the same time, JPB offers the network organizations resources to pursue their own strategies. “While we want a portion of the money to be aligned with the hub,” says Picower, “we recognize that they have important missions that need support, too.”

“JPB has helped create a North Star,” Bhargava says. “I don’t think that has happened in this field before.”

Bridgespan has been fortunate to work with both The JPB foundation on its poverty portfolio strategy, and CCC, on its strategy to reduce poverty.