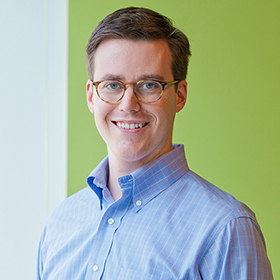 Principal, New York
Peter Grunert is a principal in Bridgespan’s New York office. Since joining Bridgespan, Peter has advised leading philanthropies and nonprofits operating in Africa, India, and the United States across a number of issue areas, including education, global development, impact investing, technology, and public health. Peter has also served as a facilitator and coach in Bridgespan’s two-year consulting and capacity building program for nonprofit executive teams, Leading for Impact®.

In addition to his casework, Peter has contributed to Bridgespan’s knowledge efforts to further the sector’s thinking on scaling social programs and approaches for strengthening nonprofit organizational capacity and financial health.

Prior to joining Bridgespan, Peter worked in finance at Citigroup in its Global Markets group in New York and London. He also spent a year in the Pacific Northwest working with Catholic Charities as an AmeriCorps member.

Peter earned his MBA from the Yale School of Management and his bachelor's degree from Loyola University Maryland, where he was a member of the Honors Program and a Presidential Scholar. He also attended the Institute for Design and Public Policy, a joint initiative of the Rhode Island School of Design and the US Department of State.